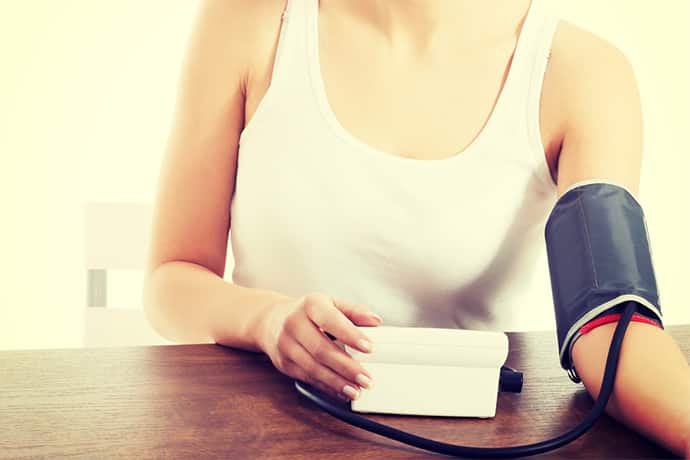 Hypertension – more commonly known as high blood pressure – is one of the most common diseases in industrialised countries. 40% of people over the age of 25 are affected by the disease, which, in turn, is a major risk factor for cardiovascular and renal diseases. A plant-based diet is suitable for both the prevention and treatment of hypertension.

The cardiovascular system is one of the most important organ systems in the human body. It allows blood to distribute all necessary nutrients, hormones, the oxygen we breathe, and many other chemical compounds from and to all cells and organs in the body. In this way, it also helps with regulating, stabilising, and maintaining body temperature and pH, as well as fighting diseases. The cardiovascular system consists of the blood, heart, and blood vessels. Blood pressure is one of the body’s key vital signs and describes the pressure of the circulating blood on the walls of the blood vessels. Normal blood pressure is considered to be less than 120/80 mmHg.1 2

High blood pressure is divided into one of two categories, depending on the severity of the condition (see Table 1). It should be taken into account that systolic blood pressure increases with age. The reason for this is that the elastic walls of our blood vessels become more rigid as we grow older. If blood pressure values are elevated (that is, above 120/80 mmHg) there is a high risk of hypertension developing. Values above 130/80 mmHg, meaning systolic blood pressure higher than 130 and diastolic pressure of more than 80, are considered to be the markers of high blood pressure. A precise classification can be made using the following table.7 8

Hypertension, also called ‘the silent killer’, often develops slowly and is sometimes asymptomatic. Worldwide, four out of 10 adults over the age of 25 are affected by arterial hypertension – high blood pressure in the arteries. According to the Global Burden of Disease (GBD) study, hypertension is the second most common risk factor for premature death worldwide. The World Hypertension League (WHL) estimates that approximately 10% of 2016’s global healthcare costs were due to high blood pressure nad its complications.10 In low and middle-income countries, the treatment of people with high blood pressure could save 4.7 million lives over the course of a decade.11

Effects and symptoms of hypertension

Hypertension poses several health risks. It is estimated that the risk of dying from cardiovascular disease doubles with every 20 mmHg added to systolic blood pressure or every 10 mmHg increase in diastolic blood pressure.12 The increased pressure on the arteries can lead to them becoming damaged or constricted. This, in turn, can be a risk factor for arteriosclerosis.13 In addition, aneurysms (bulges in the arterial walls) may develop. In the worst-case scenario, an aneurysm will tear and cause internal bleeding. People suffering from high blood pressure are also at greater risk of vascular dementia, strokes, nerve damage to the eyes, and sexual dysfunction. Additionally, hypertension is also considered one of the most common causes of kidney failure, since high blood pressure can damage the kidneys’ small blood vessels, preventing waste products from being expelled.14 15

Diet and lifestyle have a major influence on the development of hypertension. In addition to genetic predisposition and pre-existing conditions such as diabetes mellitus type 2 and kidney disease, a high consumption of alcohol, tobacco, salt, and saturated fatty acids play a role as risk factors. On the other hand, regular exercise, a body weight in the ideal range, and an adequate supply of potassium can reduce blood pressure.16 A well-planned diet can therefore guard against the development of hypertension and be used to treat the condition.

Several studies have shown that there is a correlation between the consumption of red meat and high blood pressure.17 18 19 In addition to foods containing large amounts of saturated fatty acids, a high consumption of sodium, salt, or cholesterol also has a negative effect on blood pressure.20 Processed animal products, in particular, such as cheese, sausage, other meat products, and ready meals, are often very rich in salt, fat, and cholesterol.

According to several studies, people who follow vegetarian diets have lower blood pressure levels compared to people who eat meat.21 Some studies have shown that a high potassium intake, as found in a balanced, plant-based diet, lowers hypertension.22 Sources of potassium include fruit, vegetables, and pulses.23 Since potassium also has a physiologically antagonistic effect on sodium, increasing potassium intake in one’s diet can lower blood pressure.24 Magnesium and calcium also have a positive effect on high blood pressure.25 Both are found in green leafy vegetables, such as spinach, as well as in legumes, nuts, seeds, and whole grains.

According to a study published by Harvard Medical School in 2016, an increase in the intake of plant protein was associated with a lower mortality rate, especially cardiovascular mortality. “Substitution of plant protein for animal protein, especially from processed red meat, may confer a substantial health benefit. Therefore, public health recommendations should focus on improvement of protein sources”, the researchers concluded.26 A systematic review of 32 prospective cohort studies came to the same conclusion.27

The high consumption of animal-based products is one of the main causes of widespread lifestyle diseases such as obesity, diabetes, and cardiovascular disease. These diseases, as well as high blood pressure, can all be managed and even avoided by following a more plant-based diet that is less calorie dense and lower in saturated fats, salt, and refined sugars. Food from plants contains no dietary cholesterol and provides a plethora of vitamins, minerals, fibre, and secondary plant compounds, all of which play an important role in sustaining human health.

ProVeg tips for the prevention and therapy of hypertension

Hypertension can be treated and counteracted with a healthy diet and lifestyle:

Should blood pressure reach stage 1 and it is not possible to reduce it to the desired extent with a change in diet and lifestyle, medication should be administered by a doctor.