European Elections: calling for a shift towards a sustainable food system 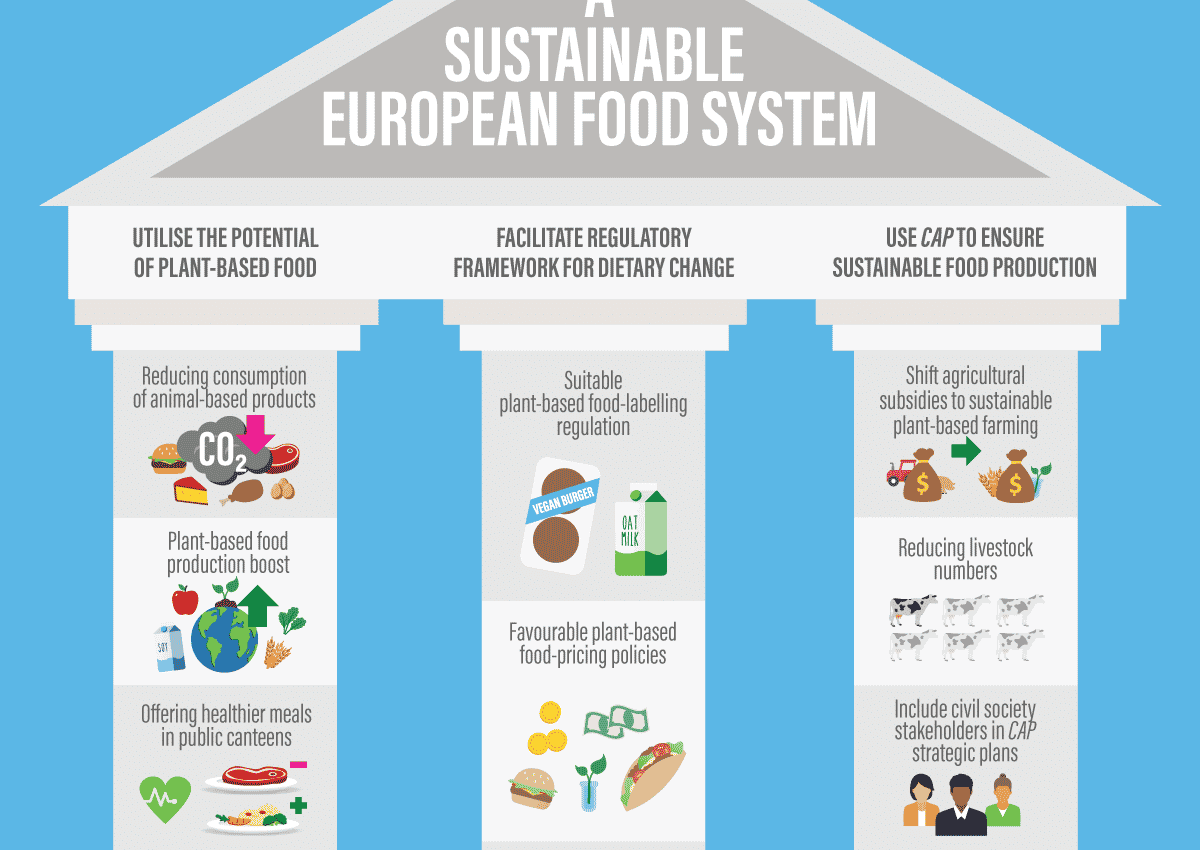 With the European Parliamentary elections drawing closer, ProVeg, together with the umbrella organisation European Vegetarian Union (EVU), has gathered core demands for the next legislature to consider in order to reshape the European food system.

The food system must become sustainable

To date, the European food system and its agricultural policies have failed to adequately address urgent environmental, animal welfare, climate, and health issues. In particular, the current levels of production and consumption of animal-based products are unsustainable as they negatively affect the health of both humans and animals, as well as the environment, climate, and resource availability. One of the key political instruments used to steer the direction of agricultural policies in the European Union is the Common Agricultural Policy (CAP). The current EU legislature has started negotiations around a reform of CAP for after 2020, which the next Parliament, Commission, and Council will continue. Now is the time to set a new course for the European food system over the course of the coming decades.

Taking all this into account, ProVeg proposes ‘Three Pillars for a Sustainable European Food System’.

The first pillar is dedicated to the recognition of the potential of plant-based foods. Plant-based foods generate less greenhouse gas emissions than animal-based foods 1 and require fewer resources 2. At the same time, their consumption is lagging behind recommended levels.3 As such, public canteens and cafeterias should offer more healthy and climate-friendly plant-based dishes.

The second pillar of a sustainable European food system should facilitate a regulatory framework for dietary change. Food labelling is a key area of improvement in this regard. The European Commission finally has to start working on the implementing act for definitions of the terms ‘vegan’ and ‘vegetarian’ in voluntary food labelling, as requested by the Food Information Regulation since 2011.4 Furthermore, attempts at banning sales denominations for veggie alternatives that reference names of their animal product counterparts need to be defeated. Names such as ‘vegan burger’ guide consumers in their purchase decisions and convey important information about the product. Additionally, taxation policies can be used to create a favourable framework for plant-based foods. Such food items should not be disadvantaged compared to animal-based foods. On the contrary, their production and consumption should be incentivised with fiscal measures.

For the third pillar, CAP must be designed to ensure sustainable food production and consumption, as well as environmental and animal protection. Around one-third of the EU’s budget is dedicated to CAP, accounting for over 350 Billion Euros (disbursed over the new CAP period 2021-2027)5 This massive amount of subsidies should be spent in accordance with sustainability and climate targets as well as the protection of public goods. Again, more support should be given to plant-based food production and the reduction of livestock numbers. Additionally, all funds that could be dedicated to eco- and climate-friendly farming under the current proposal by the Commission should be fully exhausted. Finally, civil society stakeholders should be consulted in the process of developing the agricultural framework of the EU.

ProVeg will continue to follow the political developments in the areas of foods and agriculture during the coming EU legislature. Where possible and necessary, ProVeg will seek dialogue with politicians and stakeholders to improve the political framework for plant-based diets and food production.

Have a look at our detailed demands for the next European Parliament and Commission here: ‘Three Pillars for a Sustainable European Food System

If you would like to take action and place pressure on your election candidate to take on these issues, we have written a letter that you can email to them.