What is cellular agriculture? 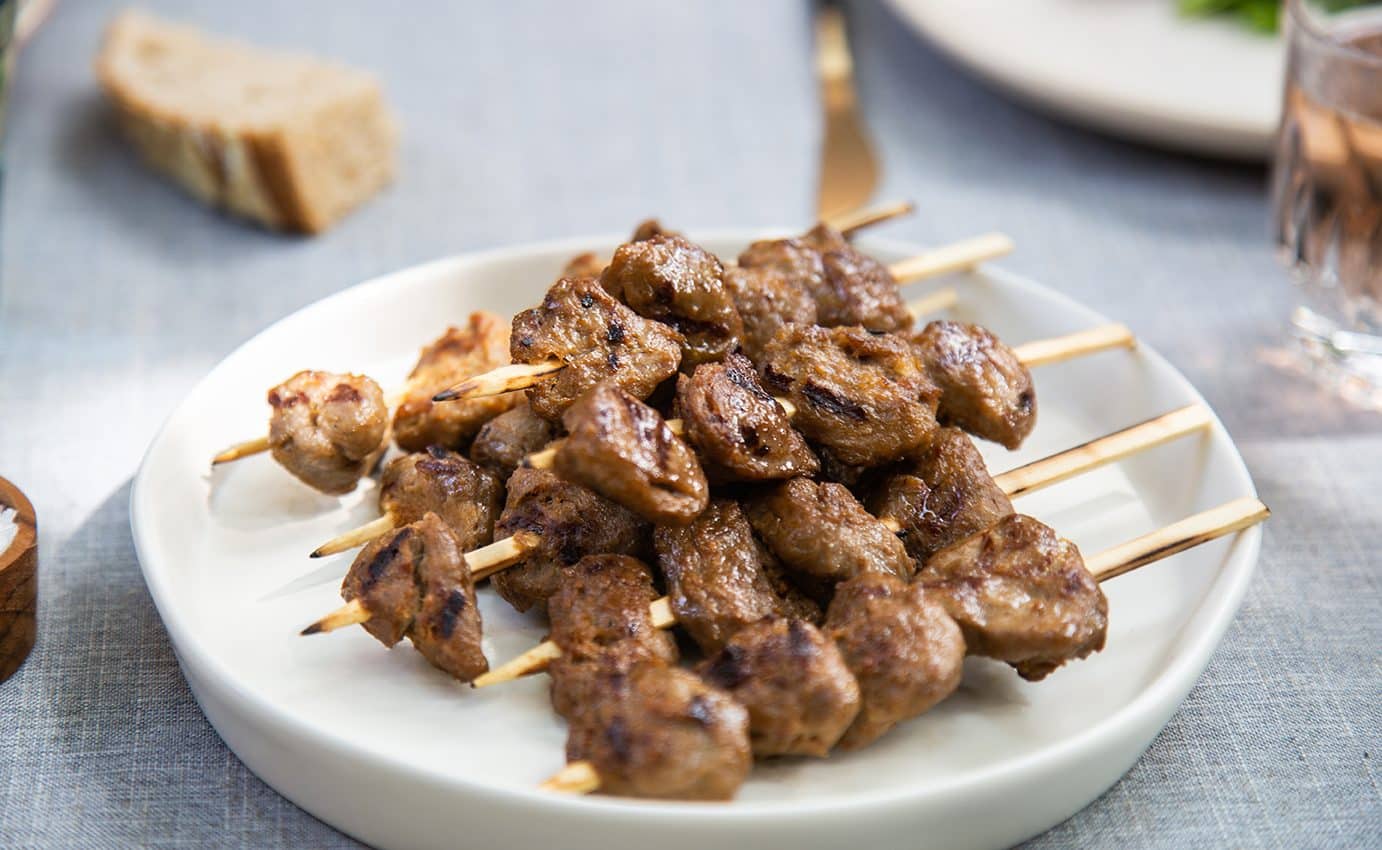 What exactly is cellular agriculture and how are cultured versions of traditionally animal-based food produced? ProVeg answers some of the questions you might have about this promising method of food production.

Cellular agriculture is the production of animal-based products from cell cultures rather than directly from animals. After hunting and domesticating animals, cellular agriculture looks set to become the third phase of human sourcing of animal protein. In this blog, we’ll cover the following topics: 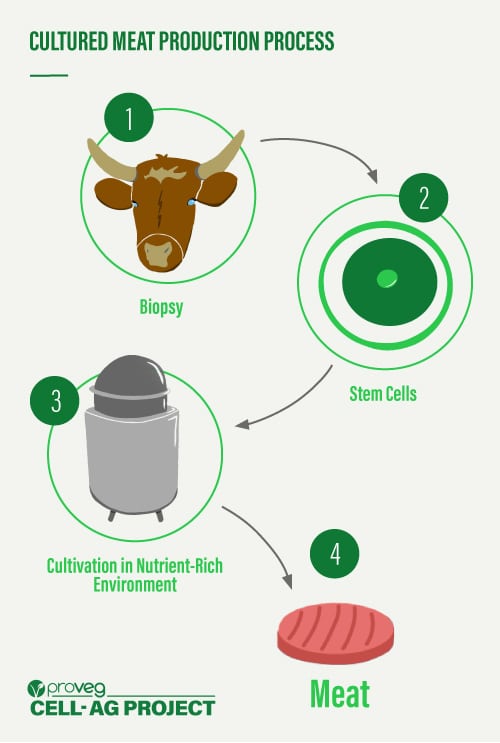 Cellular agriculture currently comprises two different approaches: cell cultivation (cellular) and precision fermentation (acellular). The cell-cultivation method refers to growing meat directly from cells. Cells are the building blocks of all life. By cultivating them to produce meat and seafood, the raising and slaughtering of animals can be avoided. To produce cultured meat and seafood, stem cells are initially sampled from animals through a painless biopsy. These cells are then fed with nutrients in large vats, also known as cultivators, where they multiply and differentiate. As they grow, they become muscle tissue, which is the main component of meat. A number of startups and companies are currently working on developing a variety of cultured foods, including beef, pork, chicken, fish, seafood, milk, and cheese.

The precision-fermentation method refers to the use of microorganisms rather than cell cultures to produce products such as milk and egg-white proteins. These products can be grown directly from microorganisms such as yeast in a similar fermentation process to that which has been used for many years in the food industry to produce enzymes  such as rennet (a key ingredient to produce cheese) or vanillin (the main component of vanilla flavor), as well as other products. Startups and companies are currently working to develop milk, ice cream, cheese, gelatin, and egg-white. Some products have already been commercialized, such as Greater’s ice cream, which uses Perfect Day’s flora-based dairy proteins.

The final products aim to resemble conventional meat, eggs, and dairy in terms of taste and structure while offering significant benefits for human health, the environment, and animal welfare.

The potential of hybrid products 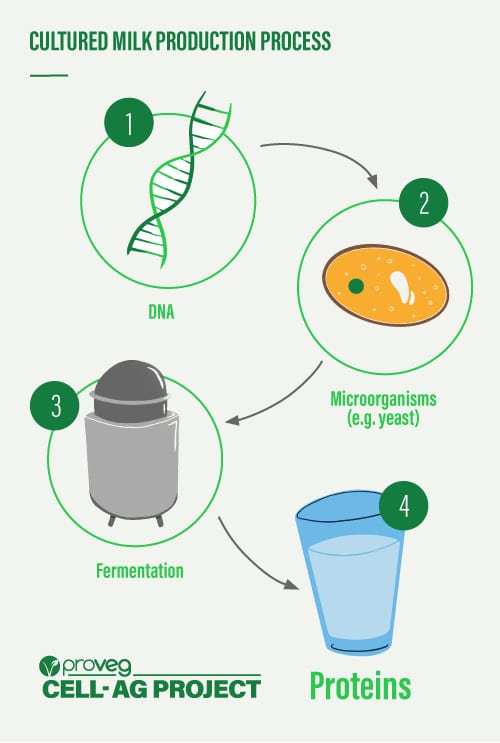 Hybrid products combine plant-based and cultured ingredients to develop tasty and sustainable products that will also potentially be cost-effective. This new product category shows many promises in terms of texture and taste, while adding an appealing juiciness. For instance, adding cultured fat to a plant-based chicken nugget could provide the genuine taste of chicken as well as improving juiciness and meatiness, while having an authentic texture, thanks to the plant-based proteins. The first proof-of-concept of hybrid products, chicken nuggets comprising 80% vegetable protein and 20% cultured fat, was unveiled in March 2019 by Peace of Meat, during a public event organised in Berlin. Looking at it this way, plant-based and cultured products are not mutually exclusive categories but actually form a highly promising complementary strategy – together, they have the potential to accelerate market entry by combining two different approaches to arrive at a perfect result, rather than perfecting just one approach completely.

The aim of cellular agriculture

Cellular agriculture aims to provide people with the animal-based products they know and like, but with a lighter impact on the environment as well as numerous human health benefits and significant improvements in animal welfare. These products are complementary to plant-based products as the target market is not vegans or vegetarians but those who find it challenging to exclude animal products from their diets.

Market opportunities and support from the food industry

Cellular agriculture presents enormous economic opportunities. Several celebrity investors have been supporting the technology since its inception. A growing number of universities and around 70 companies and startups around the world, including some of the world’s leading meat producers, are currently working to develop cellular-agriculture products.

Promising regulatory initiatives for creating guidelines for cellular agriculture are currently in progress in some parts of the world. Food regulatory authorities are already familiar with the use of cellular bioengineering in food. For example, rennet, an enzyme found in the stomachs of ruminant mammals which is used to produce many kinds of cheese, is already produced directly through cellular agriculture.1 In addition, the positive environmental impact, food-safety perspectives, and the economic prospects for cultured animal products are likely to drive governments to support cellular agriculture.

In November 2018, the American Food and Drug Administration (FDA) proposed a regulatory framework favourable for the marketing of cultured foods.2 In March 2020, the FDA recognised the fermented whey protein produced by the startup Perfect Day as safe, accrediting it with the ‘generally recognized as safe’ designation.3 In March 2019, Singapore’s Minister of Finance, Heng Swee Keat, announced the establishment of a programme allocating $144 million to research and development around food, including research for cultured meat.4 The Singapore Government Agency for Scientific and Technological Research (A*STAR) is currently developing cultured chicken meat. In December 2020, Singapore also became the first country in the world to approve sales of cultured meat.5 In Jun 2020, a member of China’s CPPCC in (The National Committee of the Chinese People Political Consultative Conference) spoke out in a high-level plenary meeting with the National People’s Congress with the intent of advancing cellular agriculture, presenting it  as a keys means of making China’s food supply more sustainable and crisis-resilient.6 In July 2020, Japan’s Agriculture, Forestry, and Fisheries Ministry announced the creation of new rules and regulations for meat-alternative products, including cellular agriculture.7
In Europe, Philippe Muyters, the Flemish Minister for Innovation, said through his spokesperson, that “cultured meat has enormous potential and we have to focus on production”.8 The Flemish government awarded a 3,6 million euro grant to a Belgian consortium that wants to grow fat and liver cells to make foie gras.9 In France, the PBI France (Public Investment Bank) funded a French startup also working on foie-gras production. The European Institute of Innovation & Technology’s food branch, which focuses on entrepreneurship and innovation in the food sector, supports cellular-agriculture projects such as the work of the Danish Technical University, which is currently working on milk-protein production, and the Przemiany Festival in Poland, which had a focus on cultured meat, and partners with companies such as Aleph Farms. Meat4all, a cell-cultured meat research programme, has been awarded a €2.7 million grant under the European Union’s Horizon 2020 R&D funding framework.10 In August 2020, the Icelandic plant-based biotech company ORF Genetics was awarded a €2.5 million grant from the Grant Management Services of the European Commission to develop plant-based growth mediums.11 In December 2019, the Dutch cultured-meat company Meatable also received a $3 million grant from the European Commission, through the Eurostar Programme.12

The most pressing challenges currently facing cellular agriculture include research, regulatory aspects, and consumer acceptance. More publicly-funded, open-source research is required to address technical challenges such as growth mediums, cell lines, and consumer safety. The regulatory framework for cellular-agriculture products needs further elaboration in order to create a supportive environment for producers and consumers. In addition, consumers need to be informed about and updated on the potential benefits of, and current developments around, cellular agriculture in order to ensure widespread acceptance of these products. The CellAg Project focuses its efforts on key aspects within these three areas in order to help create encouraging conditions for introducing this new and promising method of protein production. 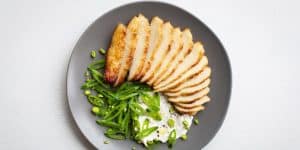