Wild animals as food – increasing the risk of zoonotic pandemics

One form of human intrusion into ecosystems and animals’ natural habitats is the use of wild animals as food in the context of hunting, wet markets, and bushmeat. Historically, the consumption of wild animals has been a component of the diets of many hunter-gatherer and forager cultures. Today, wild animals remain part of the diets of many communities around the world.1 At the same time, illegal wildlife trafficking has also become a big business that is worth up to US$ 23 billion.2 Every year, millions of wild animals are taken from their natural habitats – often illegally. In addition, various wild animal species are bred in unnatural, intensive farm settings. 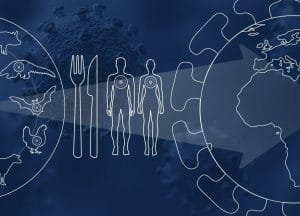 Zoonotic Pandemics – Viruses, animals, and humans in a globalised world

In today’s globalised world, the risk of future zoonotic outbreaks and the severity of their impacts increase with a surge in demand for animal-based products.

The pangolin – probably involved in the emergence and spread of COVID-193 – is one example of an animal that is consumed as both meat and as medicine. Two out of the four Asian species are classified as ‘critically endangered’ and the other two as ‘endangered’.4 Pangolins are believed to be the world’s most trafficked mammal, accounting for a large part of all illegal wildlife trade and imported illegally into various countries on a massive scale.5 About a million pangolins are assumed to have been killed over the course of the last decade. However, the actual amount might be much higher as only a small portion of illegal trade is intercepted.6 7 8 There are estimates that close to 2.7 million pangolins are poached every year, in central Africa alone.9 Beyond pangolins, there is a wide range of wild animals and products from wild animals that are illegally traded – from bats to tigers to elephants. This makes the human exploitation of wild animals an additional risk factor for endangering biodiversity and already highly vulnerable species. Crucially, it also drives the emergence of zoonoses – through both aggravating the general environmental conditions (see 2.1) and creating direct gateways.

When handling, slaughtering, or eating wild animals, viruses present in the animals can jump the species barrier. If humans are exposed to the virus, it can be transferred via compromised skin tissue or the mucosal membranes of the mouth, nose, or eyes, potentially allowing for the emergence of novel zoonotic infections.

Beyond Wuhan, pangolins and COVID-19

Regardless of whether the spillover of SARS-CoV-2 to humans actually occurred at the wet market in Wuhan, and irrespective of the exact animal species involved (see 1.5), the wild animal trade nevertheless poses a major risk for the emergence of zoonotic pathogens. It enables the supply of wild meat to urban consumers, leading to an increased movement of species and thus increasing the likelihood of zoonotic pathogen spread and exposure. This presents a major health risk to human populations worldwide.10 Wildlife has been identified as a source of high-impact, recently emerging zoonoses. Such pathogens include the Ebola and Marburg viruses, HIV, Nipah, Hendra, the Menangle virus, the West Nile virus, and others such as the coronaviruses which caused the global pandemics of SARS and MERS and, of course, various strains of influenza A.11 Theoretically, just one human being handling just one animal carrying a virus might suffice for animal-human transmission to occur – and to set in motion a disastrous process such as the one the world is currently experiencing.

The emergence of HIV – another food-related disaster

An example of how using wild animals for food can lead to the global spread of a dangerous pathogen is the emergence of the human immunodeficiency virus (HIV), which leads to acquired immunodeficiency syndrome (AIDS) in humans. While the virus and the disease are well known to the general public, its food-related origin is not. To date, HIV has infected about 75 million people, claimed more than 32 million lives, and continues to newly infect about 1.7 million people each year, despite extensive awareness campaigns.12 AIDS is a disease for which, almost 40 years after its first clinical report, there still is neither a cure nor a vaccine, but only lifelong treatment measures to keep it at bay. The multistaged emergence of HIV-1 and HIV-2, the two subtypes, is highly complex. However, it is now widely accepted that both types of HIV are the result of multiple cross-species transmissions of simian immunodeficiency viruses (SIVs), a virus that naturally occurs in African primates.13

The emergence of HIV can be traced back to Kinshasa in 1959, a time when urban populations in central Africa were expanding and logging operations had started to advance deep into the rainforest.14 Because roads provided access to remote forests, they enabled a growing bushmeat trade between hunters and urban centres. The hunting and butchering of nonhuman primates, an integral element of traditional livelihoods for many people in the region, has been identified as a high-risk behaviour. It is viewed as a likely source for the repeated transmission of SIVs to humans, which eventually led to the virus’s ability to spread from human to human.15 This is not a problem of the past. With expanding human populations in many economically deprived regions, the bushmeat trade has continued to expand and has been increasingly commercialised. It is now estimated to total as much as 3.4 million tons of wild meat per year, in Africa alone.16 The Food and Agriculture Organization of the United Nations (FAO) has named unsustainable bushmeat consumption in West and Central Africa as one of the region’s most important biodiversity and conservation challenges.17 18

The overall outlook is highly alarming for two reasons: first, wild animals carry a great diversity of as yet unknown viruses; second, humans are increasingly interfering with wild animals’ natural habitats and using them for commercial purposes such as food, medicine, and fashion. Of course, the solution to reducing the risk of zoonoses is not the eradication of wild animals as carriers of viruses, but the preservation of their natural habitats and ending their use as food items. The single most culpable species for the emergence of pandemics is us: Homo sapiens has become a super vector – a threat multiplier – for zoonotic pandemics.19 Increasing conservation efforts and empowering local communities to find alternative sources of food and income is crucial to preventing new pathogens emerging from the depths of complex ecosystems. Given the potential global risks, this is a task not only for local governments but – crucially – also for the global community.

Banning wildlife markets – and the elephant in the room

In the wake of the coronavirus pandemic, the UN has urged for a ban on the trade of live wild animals at wet markets as a preventive measure for future pandemics.20 While banning the trade of wild animals – not only for food but also for other uses such as fur and medicine21 – may be a reasonable step, the risk of emerging viral diseases largely remains. This is due to the fact that many pathogens of recent concern to human health originate in, or are transferred to humans from, domesticated animals farmed for human consumption.22 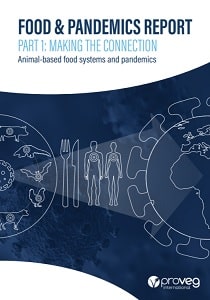 By exploring the crucial connection between the current crisis and our animal-based food system, the ProVeg Food & Pandemics Report highlights how our food choices help to create a recipe for zoonotic pandemics.