Algae – nutritious lettuce from the sea 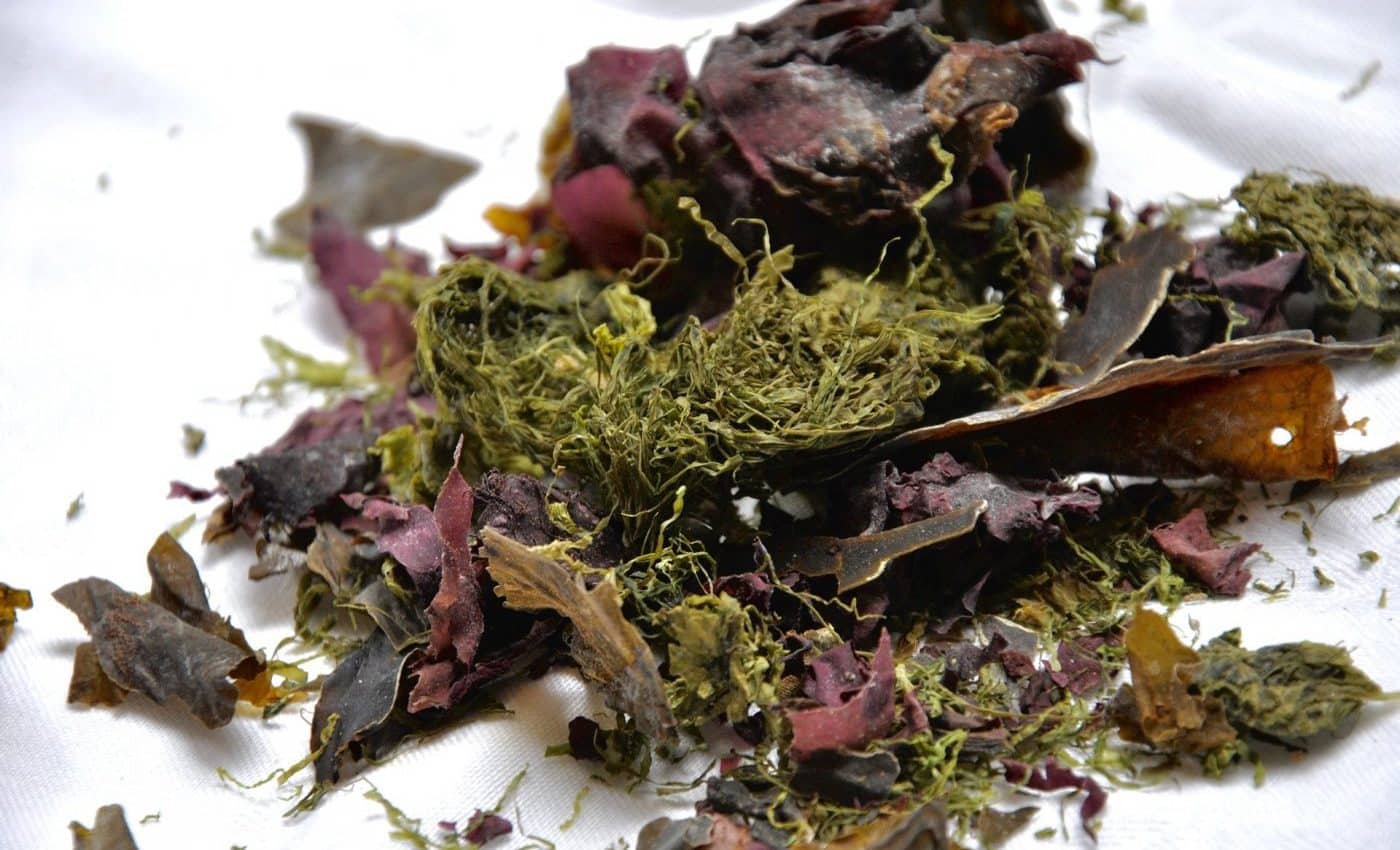 Algae and seaweed (which is actually a kind of algae) have long been key components of many regional coastal diets, particularly in Asia. In recent years, sushi, seaweed, and algae have become popular and increasingly mainstream food items. ProVeg presents a selection of the different types of algae, along with their health benefits.

Algae are divided into microalgae and macroalgae, based on their size. While microalgae sometimes only measure a few micrometers, macroalgae are visible to the naked eye and can measure up to several meters. In most cases, macro algae are used as an ingredient in dishes, while microalgae tend to be used more often in food supplements or food additives.1

Kelp refers to several kinds of brown algae, which often form ‘forests’ on stony parts of the seabed. Kelp grows in cold temperatures. For example, the subspecies laminaria can be found in the Northern Atlantic.21 Seaweed is often used as an umbrella term that includes brown algae such as wakame and kombu.22 23

Algae have the ability to absorb minerals and trace elements from the water, and are thus high in iron and calcium, for instance. In addition, many algae are rich in vitamins such as vitamin C and B12, and also contain large amounts of beta-carotene. They are quite high in protein, while their fat content is minimal. The nutrient profiles of algae vary, depending on the type of algae as well as environmental conditions, time of harvest, and the method of preservation.24

Nutrient levels are also dependent on water quality, regardless of whether the algae is harvested in aquacultures, salt water, or fresh water.25 However, since algae is usually served in small portions, fruit and vegetables are generally better sources of vitamins and minerals.26 27

A plant-based diet can provide an ample supply of all the nutrients needed for optimal health. But whether you’re a vegetarian, vegan, or meat-eater, a healthy body requires a balanced and varied diet that includes all the necessary nutrients.

Algae is rich in iodine

Algae is considered to be a good source of iodine and can replace iodized table salt. However, special caution is required as the iodine content can vary greatly between different species of algae, as well as within a species. It is therefore very difficult to make reliable statements about the iodine content of algae.29

The National Institutes of Health recommends a daily consumption of 0.15 mg of iodine for adults.30 Due to potentially severe side effects when consuming too much iodine, the German Federal Institute for Risk Assessment holds the position that algae products which contain more than 20 mg per kg are not legally saleable.31 Algae products with a level of iodine between 10 and 20 mg per kg should carry a warning label since excessive consumption can lead to thyroid problems (hypothyroidism/hyperthyroidism).

Moreover, algae products should provide information about the level of iodine they contain, the recommended maximum daily dose, and the correct preparation. Only then, can consumers get an idea of how much iodine they are consuming and avoid overconsumption. Algae such as arame, kombu, wakame or hijiki are especially high in iodine. When these points are taken into account, algae can be a good source of iodine and part of a healthy meal plan.32 33

In June 2003, the European Commission decided that, under certain conditions, the oil of the microalgae Schizochytrium sp., which is high in DHA (docosahexaenoic acid) and EPA (eicosapentaenoic acid), may be used as a food ingredient.34 35 Another DHA-rich microalgae oil, extracted from the microalgae Ulkenia sp., was approved as an additive for certain food groups in 2009.36

Alginates are the cell walls of wakame and are classified as dietary fibre. They have gel-forming properties and can thus enhance the feeling of satiety. Additionally, alginates inhibit certain enzymes so that already-bound carcinogens stay in the intestine, are not reactivated, and are instead secreted. As a consequence, the consumption of brown algae can help to prevent cancer. On the other hand, calcium also binds to alginates, and thus becomes unavailable to the body. However, within the context of a balanced, nutritious diet, this does not present a problem.38 39

The polysaccharide Fucoidan is found mainly in wakame and kombu, and is a by-product of the extraction of alginates. For some years now, there have been research approaches which suggest that fucoidan has the potential to be used as a pharmaceutical product. Supposedly, it has a positive impact on the immune system and on tumours and viruses. However, the cause of these effects is still unclear, as is the question as to whether they have any significant impact on the human body. Further studies are required to clarify these issues.40 41 42

Algae is harvested directly from the sea, as well as cultivated in marine farms. In Asia, the harvest of algae has a long history. However, macroalgae is also harvested in several European regions, with France being the biggest algae producer in Europe. Worldwide, China claims first place, followed by Indonesia, the Philippines, South Korea, and Japan. Other countries where algae is harvested include Ireland, Great Britain, and Norway.43 44 The microalgae spirulina is especially prevalent on the world’s algae farms: for example in the USA, Thailand, Taiwan, Chile, Spain, Australia, and China.45

Alginic acid, agar-agar and carrageenan: algae in the food industry

The food additives alginic acid, agar-agar, and carrageenan are extracted from the cell walls of algae.46 47 For the extraction of alginic acid and alginates (E400 to E405) brown algae is used. These additives are used as stabilizers and thickening agents in foods such as ice cream, salad dressing, and pudding.48 Agar-agar is extracted from red algae and is used as a thickening agent (E406).49 Red algae are also used for the production of carrageenan (E407), a gelatin-free additive that is used as a stabiliser and gelling agent.50

The food, beverages, and supplement industries use several carotenoids derived from algae – as a source of provitamin A and as food colouring agents. Beta carotene and astaxanthin, for example, are extracted from micro algae and sold mainly as food supplements, as well as being used as a colouring agent for desserts, ice cream, and beverages.51 52

There is an increasing number of products which are fortified with certain kinds of algae – for example, smoothies with added chlorella and spirulina.53 Aphanizomenon flos-aquae (AFA), a type of freshwater algae harvested mainly from mountain lakes in Oregon (USA), belongs to the group of cyanobacteria and is available as a powder and as pills.54 These algae are remarkably low in iodine, while providing high levels of protein, vitamins, and other minerals. Since the daily consumption of this product is limited to a few grams, the amount of nutrients which can be absorbed by the body is rather low in comparison with other foods. The German Federal Institute for Risk Assessment points out that there is no scientific proof that these algae products come with any health benefits or have a positive effect on diseases.55

Strictly speaking, there is the problem of certain types of cyanobacteria, such as AFA algae, accumulating toxic substances (for example heavy metals), as well as producing such substances themselves. Therefore, it cannot be ruled out that these products have a negative impact on health.56 57 58 AFA algae are not cultivated, but harvested from the sea. Since they often grow next to toxic algae, AFA algae can also be contaminated with their toxins.59

Tips for cooking: cooking and storage

Algae is often sold dried and can be stored almost indefinitely. After washing them, they are soaked in water to let some of the iodine seep into the water .Rinsing the soaked algae further reduces the iodine content. Nori, however, is an exception and does not have to be soaked.
To give soups and stews a hearty note, small pieces of dried algae, which may be roasted beforehand, will suffice. Their glutamic acid is a natural flavour enhancer. Ground to a powder and stored in a jar, this condiment is almost non-perishable.

Nori is especially popular when it comes to cooking with algae. Thanks to nori, the vegan versions of fish cakes, herring salad, and tuna sandwich are convincing alternatives.

Fresh or dried algae can broaden one’s diet and are considered a good source of nutrients. However, for health reasons, you should note the following: 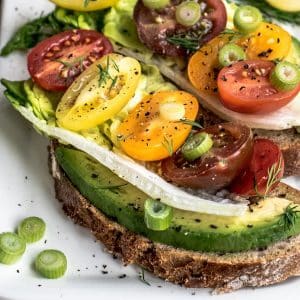 ProVeg has created a recipe collection with the most delicious dishes. In our collection, you can find plant-based inspirations for breakfast, lunch or dinner. What do you want to cook today?