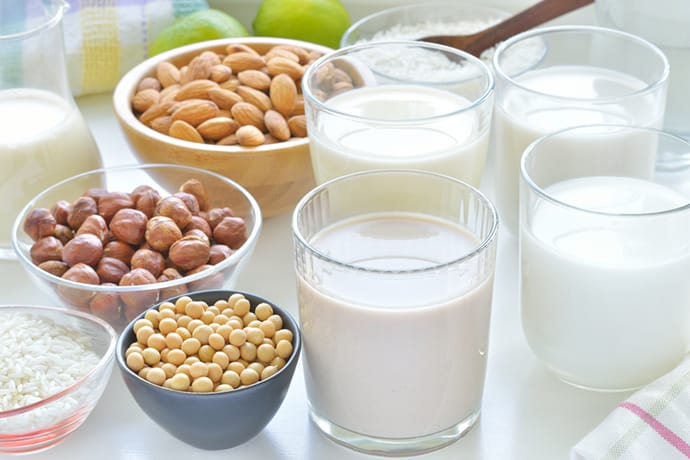 Although plant milks have been consumed for centuries in various cultures, their popularity has skyrocketed over the past decade. People choose plant milk over dairy milk for a variety of reasons. Whether it is for their nutritional value, animal-welfare reasons, lower environmental impact, to avoid lactose or dairy milk allergens, or simply out of preference, there are many great options to try. ProVeg presents the 10 best plant milks.

More and more consumers are questioning the consumption of cow’s milk and the effects that our diets have on cows, the environment, and our health. This is also reflected in the increasing demand for non-dairy milk. Plant milks have been consumed for centuries in various cultures, but their popularity has skyrocketed over the past decade. The range of healthy vegan milk alternatives for drinking, cooking, and baking is now huge. Some plant milks have sugar added to them, but unsweetened options are also available.

Almond milk  has a mild and slightly nutty taste and is ideal for eating with cereals. Nutritionally, almond milk is quite different to soya or dairy milk. It has fewer calories and much less protein. The small amount of fat in almond milk is unsaturated fat, which should be preferred from a health perspective. Because almond milk is so strongly diluted with water, it is relatively low in calories but also much lower in nutrients, compared to unprocessed almonds.However,  home-made almond milk can be a rich source of calcium, if enough almonds are used.

Cashew milk has a slightly nutty taste and is suitable for cooking and baking. The fat contained is mostly unsaturated fat1 and can be a great choice for people with high cholesterol levels or who need to watch their fat intake. Cashew milk has only about two grams of carbohydrates per cup. It is suitable for use in coffee and adds a thickness that works wonderfully in lattes.

Coconut milk for cooking is usually available in cans. It is ideal for cooking and baking, giving food a delicious aroma. Coconut milk is delicious in a wide range of recipes – from curries to vegetable soups, smoothies, chia seed pudding, and even ice cream. The thin coconut milk for drinking that comes in a carton is great in a cup of coffee or in cereal.

Hazelnut milk has a delicious nutty flavour, which makes it a great choice for baked goods or adding to coffee, while hot chocolate made with hazelnut milk is a great dairy-free alternative to traditional hot chocolate.

Hemp milk is made from the seeds of the hemp plant. It is low in carbohydrates and high in fat – but most of those are unsaturated fats, which should be preferred from a health perspective. Just one glass of hemp milk can provide 50% of the recommended daily intake of alpha-linolenic acid,2 and is therefore a good source of omega-3 fatty acids Because of its  slightly nutty taste, hemp milk is great with cereals but is also suitable for use in cooking and baking.

Macadamia milk has arrived on the scene much more recently than the other nut milks mentioned here and is still not widely available. It is low in calories but also very low in both protein and carbohydrates. It tastes great on its own and is particularly suitable for desserts and coffee.

Oat milk is slightly sweet, with a thin consistency that is similar to low-fat milk. With their high content of dietary fibre, phytochemicals, and antioxidants, oats are a particularly healthy food. Studies show that regular consumption of oats can have a positive effect on gastrointestinal problems, and several publications have attested to the cholesterol-lowering properties of oats.3 First studies show that also oat milk can have a positive effect on cholesterol levels.4 5 Oat milk tastes great with cereals and is suitable for cooking and baking.

From a nutritional point of view, rice milk, which is a cereal-based milk, offers no advantages over other plant milks, save for the fact that it is the most hypoallergenic milk available and therefore particularly suitable for people with allergies and intolerances. Rice milk is comparatively high in carbohydrates but low in fat, protein, and other nutrients if not enriched or fortified. During processing, the carbohydrates are split into sugars, which gives rice milk its typically sweet taste without any added sugar.

Soya milk, still the most popular plant milk, belongs to the legume-based category. It is the only milk alternative that naturally contains the same amount of protein as cow’s milk, with about 3 g per 100 ml. Due to the fact that many manufacturers fortify soya milk with calcium and other vitamins, such as B12, B2, D, and A, nutrition experts state that it can be used as a nutritionally adequate alternative to cow’s milk. In addition, soya milk has similar characteristics to cow’s milk when used as a replacement in cooking, baking, and frothing for coffee. Soya milk is also available in various flavours, such as vanilla, chocolate, or banana.

As a relative of wheat, spelt milk contains gluten, so it is not suitable for anyone with celiac disease or gluten intolerance. Since spelt milk has a relatively sweet taste, even without added sugar, it is particularly suitable for sweet dishes and can be used as a natural sweetener, for example, in coffee.

Each of the different varieties of plant milk has a unique nutritional profile as there is a wide variance in the content of protein, carbohydrates, and fats, as well as vitamins, minerals, and dietary fibre. In terms of mineral and vitamin content, there are substantial differences between the various brands. Because most producers fortify their products in order to sell them as an appropriate alternative to cow’s milk, the mineral that is most often added is calcium, in the form of tricalcium phosphate or the algae Lithothamnium calcareum. Cow’s milk contains about 125 mg of calcium per 100 ml and so most manufacturers of plant milk enrich their products with roughly the same amount (usually 120 mg/100 ml). Other substances that are present in cow’s milk, and are therefore often added to plant milk in similar amounts, include vitamins A, B2, B12, D, and E.6

ProVeg not only points out healthy, plant-based milk alternatives but also helps to make them more readily available. In 2011, ProVeg provided the idea for VeggieWorld – Europe’s first and biggest trade fair for plant-based living – and still helps the event organisers with the framework programme and the selection of exhibitors. Furthermore, innovative companies that want to enrich the plant-based sector with their products are advised and supported by ProVeg. 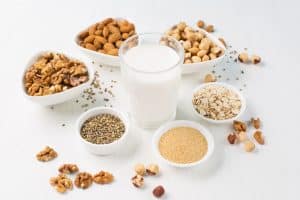 ProVeg’s first report on plant milk shines a light on the top-selling product in the entire plant-based alternatives market.