The 11 most delicious plant-based spreads and dips 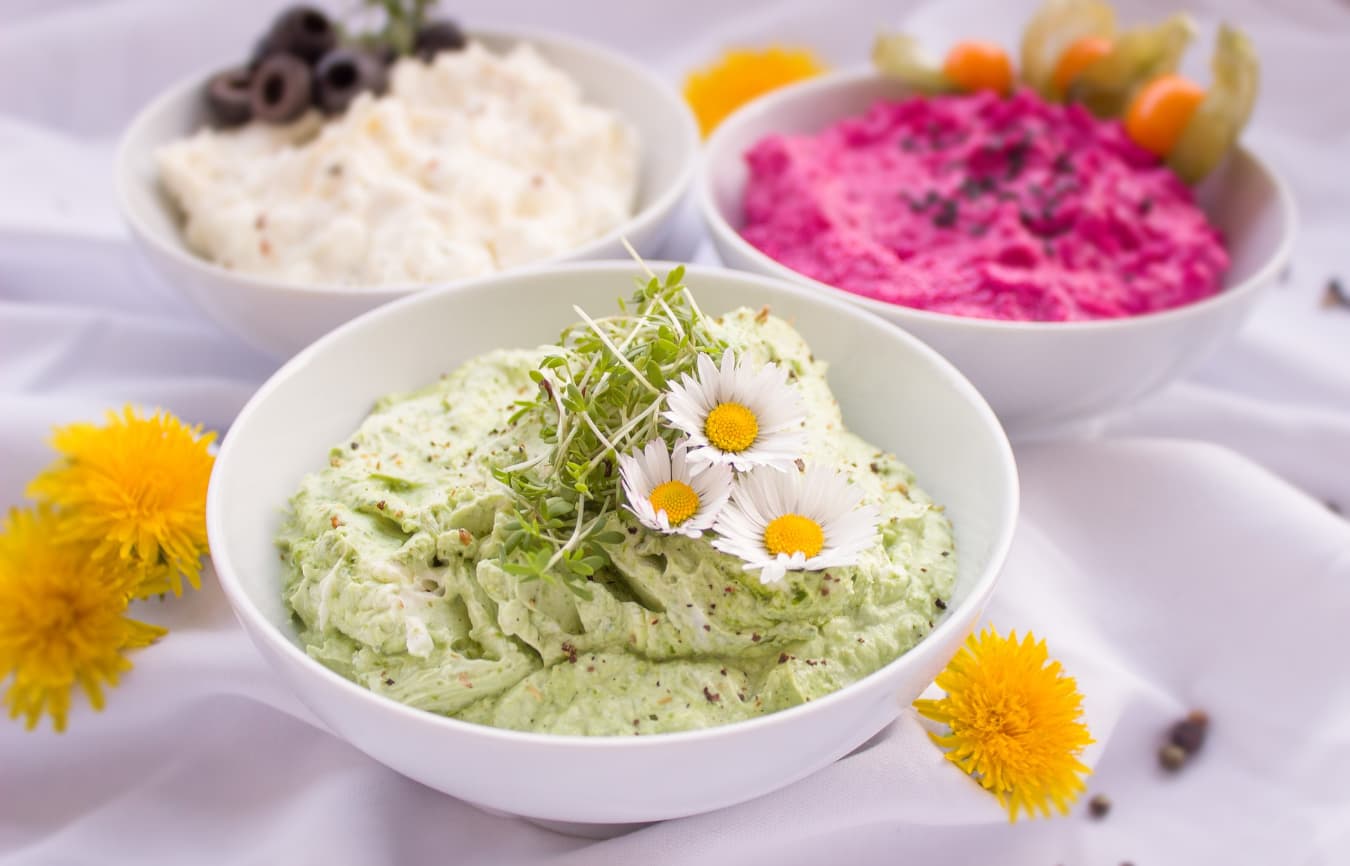 There are numerous vegan/vegetarian spreads and dips which present a healthy and tasty alternative to animal-based spreads such as butter, cream cheese, et cetera. Based on vegetables, pulses, nuts, or plant-based fats, veggie spreads are a great way to add variety to your diet.

Plant-based alternatives are on the rise

More and more people are questioning the consumption of animal products and their impact on animals, the environment, and our health. This is why many supermarkets now offer a wide range of vegan/vegetarian products. The delicious veggie spreads listed below are suitable for vegans and vegetarians, as well as anyone looking for healthy plant-based alternatives to conventional spreads.

Vegetarian and vegan spreads and dips have earned their spot on supermarket shelves. As well as spicing up a sandwich, many of the ingredients, such as pulses, vegetables, oils, nuts, seeds, and grains, make these spreads a healthy topping. The range of vegetable spreads and dips is extensive and continuously expanding.

As a sandwich topping, for frying, or in pastries – margarine can be used just like butter. To make sure that the margarine you buy does not contain animal-based components, take a look at the list of ingredients or check for the V-Label. Consumers should be careful to mainly use margarine produced from oils with a good fatty acid composition. Rapeseed oil, for example, has a particularly good ratio of omega-6 to omega-3 fatty acids (about 2:1).

Lard is not only suitable as a spread but also as a seasoning for sauces and soups. Instead of pork fat, vegan lard usually consists of coconut fat. Onions, apples, and spices round off the taste. Even people who do not follow a vegan/vegetarian diet should choose the vegan, cholesterol-free version more often – for their health and for the sake of animals and the environment.

Nut butters are made from cashew nuts, peanuts, hazelnuts, macadamia nuts, almonds, sunflower seeds, and/or sesame seeds. Nut butter is usually made exclusively from blended nuts. Some products, however, include sea salt, sugar, palm fat, or even dairy products, warranting a look at the ingredient list. Nut butters are an ideal source of plant-based fat. Furthermore, they contain valuable vitamin E, folate, protein, potassium, magnesium, and zinc.1 Nut butters can also be made at home since all it takes is pureeing the nuts in a powerful mixer. Some oil can be added for a particularly creamy result. Adding cocoa (and a sweetening agent if desired) will produce vegan chocolate cream.

4. Vegan spreads based on oil and legumes

Legume-based spreads are often made from lentils, beans, or chickpeas, as well as soya or lupins. Key ingredients range from vegetables such as eggplant, tomato, cucumber, peppers, and beetroot to herbs such as wild garlic or basil. Another common key ingredient is vegetable oil. Vegan spreads can be easily made at home.

Pâtés are usually made with meat or fish, but plant-based pâtés are a great alternative. Plant-based fats and nutritional yeast often form the main ingredients of veggie pâtés and are usually accompanied by vegetables and herbs. Nutritional yeast is popular because it contains glutamic acid, which lends a rich flavour to the spread, as well as adding folate, B vitamins, and small amounts of complete protein.2

Pestos pair well with pasta and bread. They are made from herbs such as basil, wild garlic, and parsley, as well as walnuts, cashews, or pine nuts, and virgin olive oil. The combination of monounsaturated and polyunsaturated fatty acids, vitamin E, and phytochemicals makes pesto a healthy alternative to butter and other spreads.3

Guacamole is made from avocados, which contains substantial quantities of high-quality oleic acid and vitamin E. Guacamole not only tastes delicious as a vegan spread but also as a dip with potatoes or tortillas. Avocados should be consumed in moderation since they often travel long distances before reaching store shelves and thus have a substantial environmental footprint.

This dip from the Middle East usually consists of chickpeas, tahini (sesame paste), lemon juice, olive oil, and spices, and provides plenty of fibre, protein, and calcium. Quick and easy to make at home, hummus makes a great dip for vegetables, as well as a delicious pasta sauce and sandwich spread. Hummus can also be made from black beans instead of chickpeas and is commonly available in supermarkets.

An increasing number of supermarkets and online shops are starting to offer vegan cream cheese, which is often based on lupins, soya beans, almonds, or cashew nuts, with a blend of herbs added for taste. You can also prepare your own vegan cream cheese – the choice of herbs and spices is up to you.

10. Vegan herring salad as a spread on bread

Made entirely without fish, but with juicy beetroot, fried aubergine, sour apples, fresh yoghurt, and other ingredients, vegan herring salad is a scrumptious treat. A dash of nori will add a hint of seafood.

11. Jam as a sweet vegan spread

Jam, fruit confit, and jelly are popular spreads but are not always vegan as they may contain gelatine, honey, or other animal-based ingredients (although these are wholly unnecessary to make fruit preserves). Although jams are traditionally made with pectin, a plant-based thickening agent, sometimes gelatine is used instead. Identifying vegan products requires a quick glance at the list of ingredients if the product does not carry the V-Label or a similar certification. Alternatively, fruit preserves can be made at home. They will taste at least as good as commercial products and you can ensure that they will definitely be vegan.

Use vegan spreads and dips in moderation

Despite all the healthy ingredients, one should bear in mind that plant-based spreads and dips – like animal-based versions – can be very high in fat and salt, so they should be used sparingly. Jams and chocolate spreads should also be enjoyed in moderation as they usually contain considerable amounts of sugar.

On top of that, palm fat is frequently used in margarine production as well as in many other industrially produced foods. Some palm oil operations destroy rainforests and habitats and involve human exploitation. Coconut oil is another controversial ingredient. Its popularity has increased strongly in recent years, although, on average, it is comprised of 90% saturated fatty acids and should only be used in small amounts.

Pay special attention to the labelling of vegan spreads and dips

Even though ‘vegetable margarine’ is commonly seen on the packaging, this may not guarantee that a product is completely plant-based. For example, the added vitamin D is often extracted from the wool grease of sheep (lanolin), which does not always require labelling. Mono- and diglycerides of fatty acids can also be of animal origin. However, there are vegan alternatives, which contain vitamin D obtained from plant sources such as yeast or lichen.

This is where the V-Label comes in handy. Depending on its version, the label certifies that a product is either vegan or vegetarian. If the ingredients of a spread are not clearly listed and there is no V-Label on the packaging, the only way to make sure a product does not contain animal-based ingredients is to inquire with the manufacturer. Other than that, one should generally choose organic products as they are more environmentally friendly.

Even though ‘vegetable margarine’ is commonly seen on the packaging, this may not guarantee that a product is completely plant-based. For example, the added vitamin D is often extracted from the wool grease of sheep (lanolin), which does not always require labelling. Mono- and diglycerides of fatty acids can also be of animal origin. However, there are vegan alternatives, which contain vitamin D obtained from plant sources such as yeast or lichen.

The following shopping tips will help you purchase healthy and sustainable vegan spreads: