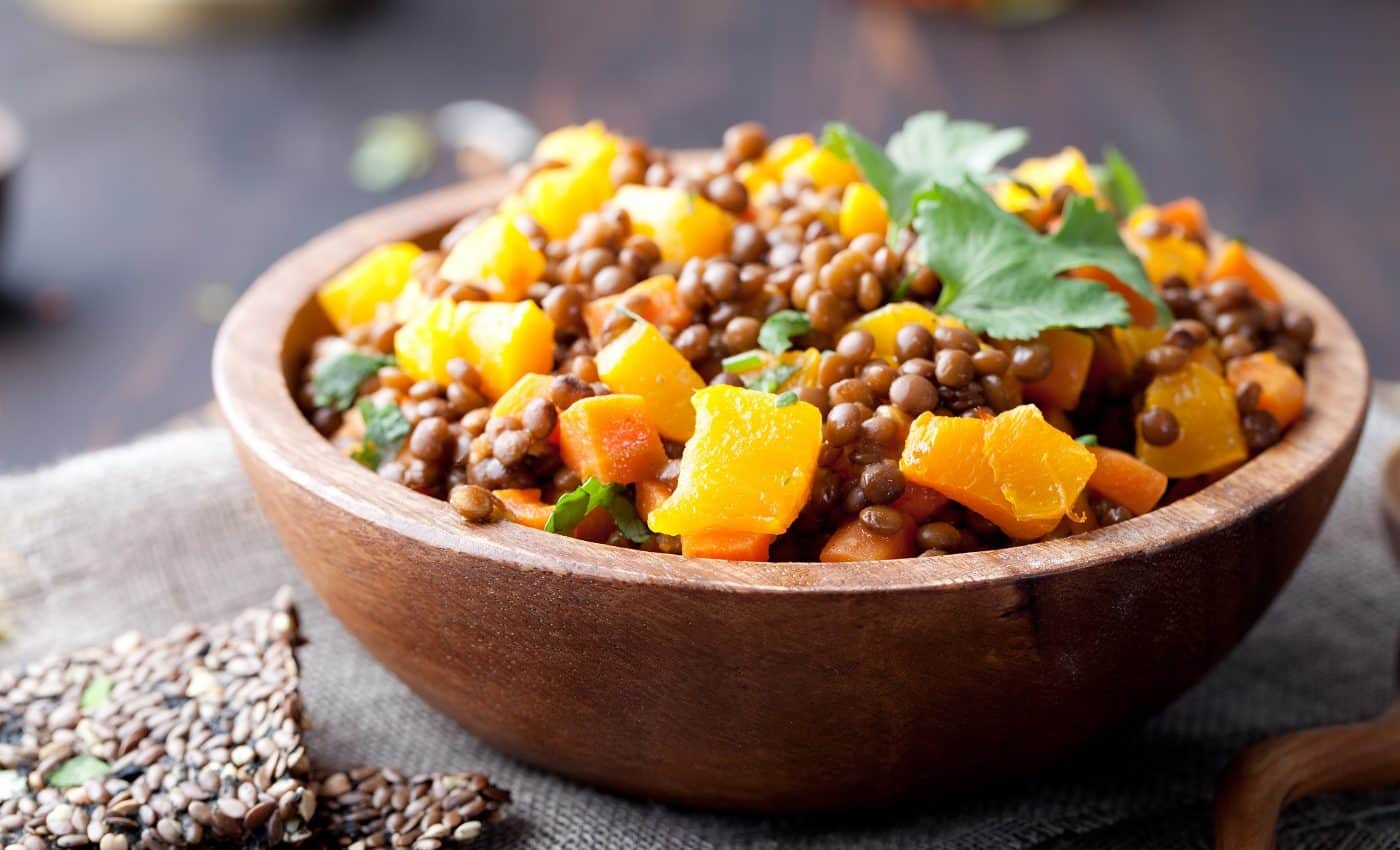 People who follow a vegan/vegetarian diet enjoy various health benefits. But no matter which diet one chooses, it is important to supply the body with all essential nutrients. Of all nutrient deficiencies, iron deficiency is the most common worldwide. ProVeg explains how daily iron requirements can best be met with healthy plant-based foods.

Iron is a trace element that is essential for various bodily functions. Most of the elemental iron in adults is in haemoglobin, a protein in the red blood cells. The remaining iron is stored as ferritin in the liver, spleen, intestinal epithelium, and bone marrow. Since our bodies cannot produce iron, it has to be ingested in sufficient quantities through food.1

Iron is essential for the synthesis of haemoglobin, which is responsible for the transport of oxygen in the body. As a component of haemoglobin, iron is used to store oxygen in the muscles. Iron also plays an important role in the supply of energy within cells and is involved in the production of hormones and other messenger molecules.2

The amount of iron regularly needed by the body depends on age, sex, and personal circumstances. Pregnant and breastfeeding women, in particular, have an increased need for iron, as do adolescents. Experts advise supplementing iron in case of deficiency or during and after pregnancy.3 Although iron is essential for the human body’s processes, too much iron is toxic. Iron supplements should always be used responsibly and in accordance with medical advice. The World Health Organization recommends that the following amounts of iron be consumed daily:4

Table 1: Iron requirements, *for a bioavailability of 15%

Iron deficiency is the most common nutrient deficiency worldwide. According to the World Health Organization, about 33% of women and 42% of children suffer from iron deficiency.5

A deficiency of this vital trace element can be triggered by infection, severe blood loss (for example, from surgery or blood donation), and also through the regular use of various medicines. Insufficient intake of iron or poor absorption rates can also lead to iron deficiency.6 If there is not enough iron available to the body, it uses its stores of iron instead. This phase is asymptomatic. Fewer new red blood cells (erythrocytes) can be formed and the enzymes that are dependent on iron reduce their activity.

Common symptoms of iron deficiency are fatigue, dizziness, hair loss, and headaches. Other characteristics include changes in the oral mucosa and oesophagus, as well as brittle nails. If inadequate iron supply persists for an extended period of time, there is a risk of iron-deficiency anaemia. Disorders of the immune system, the nervous system, and the thyroid gland are all symptoms of iron-deficiency anaemia, as is poor regulation of body temperature.7 8

Anyone suffering from symptoms of iron deficiency should seek medical treatment. Since iron deficiency can be detected via a blood test, a complete blood count should be done in addition to a serum-ferritin test. Levels of erythrocytes and haemoglobin indicate how much iron is present in the blood. Serum ferritin levels, on the other hand, correlate with iron storage levels. The following table shows the reference ranges of blood values:9 10

Mild cases of iron deficiency can be remedied by eating iron-rich food. Although animal products are considered to be particularly rich in iron, plant-based foods are also valuable sources. Amaranth, quinoa, and wholewheat flour, for example, are high on the list of iron-containing foods. In the nuts and seeds category, sesame seeds are the frontrunners, followed by sunflower seeds, pine nuts, and almonds. Pulses such as kidney beans, lentils, and chickpeas are also rich in iron. The following table indicates the iron content of various plant-based foods:11

* bear in mind that herbs and spices are nearly always used in small quantities, so their high iron content will not be significant.
Table 3: Iron content of various plant-based foods

The largest dietary source of haem iron is red meat. In 2015, the International Agency for Research on Cancer (IARC) pointed to the positive association between haem iron intake and risk of cancer, especially when it comes to red meat and processed meat. This is because during meat processing, including grilling, smoking and frying, further potentially carcinogenic substances such as N-nitroso-compounds (NOC) and polycyclic aromatic hydrocarbons (PAH) can be produced. The research team found that consuming 100 g of red meat a day increases the risk of developing colorectal cancer by 17%. As little as 50 g of processed meat per day increases the probability of colorectal cancer by 18%. For this reason, the World Health Organisation classified processed meat, such as sausages and ham, as carcinogenic, and red meat, such as pork, beef, lamb, and game, as potentially carcinogenic.13 14

People who completely or partially eliminate animal foods from their diet consume less cholesterol and smaller amounts of unhealthy saturated fatty acids. With a plant-based diet, the risk of cancer caused by haem iron can be substantially reduced. On top of that, a balanced plant-based lifestyle goes hand in hand with reduced risk of ischemic heart disease, type 2 diabetes, hypertension, and obesity. Overall, a plant-based diet is very beneficial to health.15

The absorption of iron can be inhibited by certain components of food, such as phytic acid or polyphenols. This means that coffee, black tea, and wine should not be consumed in conjunction with iron-rich foods. Other inhibitors are calcium and animal proteins such as casein, whey, and egg whites.16

Certain methods of preparation, as well as combining certain foods, facilitate increased iron absorption and thus reduce the risk of iron deficiency. To increase the intake of iron from plant sources, iron-rich foods should be eaten together with foods containing organic acids. As such, lemons, limes, and peppers are well-suited companions to iron-rich food. Sources of vitamin C should only be added after cooking since vitamin C is sensitive to heat. Garlic and onions also have properties that increase bioavailability. In addition to the specific combination of ingredients that improve iron absorption, the preparation of iron-containing food sources also plays an important role. Heating or fermenting iron-rich food increases bioavailability, while sprouting and malting do the same.17

Getting enough iron on a vegan/vegetarian diet

Vegans and Vegetarians generally consume just as much iron, and sometimes even a bit more, than omnivores.18 While the iron stores of people on a vegan or vegetarian diet may often be lower than those of people eating animal products – mainly due to the lower bioavailability of plant iron – they are still within a normal range.19 However, this may be an advantage since high iron stores are a risk factor for developing metabolic syndrome, which is a combination of diabetes, high blood pressure, and obesity.20 21

Regardless of diet, women tend to suffer from iron deficiency far more frequently than men. Various studies conclude that the level of menstrual blood loss, as opposed to diet, is the decisive factor for iron levels in women.22 People who follow a healthy and varied diet and consume iron-rich vegan food, can usually combat iron deficiency without taking supplements.