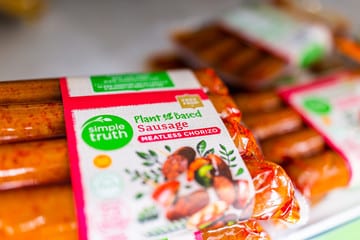 Allowing veggie foods to be labelled with traditionally ‘meaty’ names will help to promote climate-friendly diets, says food awareness organisation ProVeg International, in response to a debate over the labelling of plant-based foods in Australia.

An inquiry by an Australian Senate committee issued a report in February which recommended restricting the use of ‘meaty’ names for plant-based products, reflecting concerns expressed by the meat industry that such labelling is misleading.

However, ProVeg argues that regulatory measures should encourage rather than restrict the marketing of plant-based foods since they have far less of an impact on the environment.

“There is consistent evidence that diets high in plant-based foods and lower in animal products are less damaging to the climate,” commented Jasmijn de Boo, Vice President of ProVeg. “Policies must encourage consumers to purchase more plant-based foods and not restrict their consumption through the restrictions on labelling that are being recommended by the Senate committee’s report.”

Professor Clive Phillips of Curtin University Sustainability Policy Institute in Perth, said there were substantial gains to be made by allowing plant-based products to carry meaty names. “Plant based products that mimic meat products offer the potential for very significant improvements in environmental impact, food security, resource utilisation, animal welfare and land available for wildlife. Allowing the manufacturers to refer to the meat products they mimic, whilst ensuring that their plant origin is clear to consumers, provides the fairest information for consumers to allow free choice.”

New South Wales MP Emma Hurst said there was no evidence that consumers were being confused by the labelling of alternative products in any way. “Product names guide consumers on how and where to use them. It seems to me that a push by animal agribusiness to stop alternative products using certain terms is designed to create confusion, not solve it. It’s another pathetic attempt by an industry in decline to turn customers away from healthier, animal-friendly alternatives. But the information is already out there. Animal products are bad for your health, bad for animals, and bad for the environment. Trying to confuse consumers with labelling changes won’t change those simple facts. Governments around the world should reject these agribusiness-backed proposals and face the changing tide of consumer choices.”

Ryan Alexander, Co-Founder of No Meat May, a global challenge that encourages people to shift to more plant-rich diets, also says that there is no widespread confusion. “Recent research findings from the UTS Institute for Sustainable Futures clearly shows this, with only 4% of Australians purchasing a plant-based product because of confusion with labels.”

“Each year, more Australians are wanting to reduce their meat consumption and are seeking ‘meat-free’ or ‘meat-less’ alternatives. People are asking us for beef-free products that taste like beef. They want chicken-free schnitzels that taste like chicken. And product labelling is an important signal for them to find the products that they are seeking. This shift in consumer behaviour is driven by informed consumers making educated choices.  Australians are not stupid, and we are not being deceived or tricked into buying meat-free or meat-less alternatives.”

“With the average Australian eating four times the maximum amount of meat that is considered sustainable, and three times the amount considered healthy, we need our Governments to show leadership and support people shifting to less meat, and not to create barriers for people trying to do the right thing.”

The same debate over plant-based names played out in Europe and ended when the European Parliament decided in October 2020 to vote down restrictions on the use of meat denominations for plant-based foods.