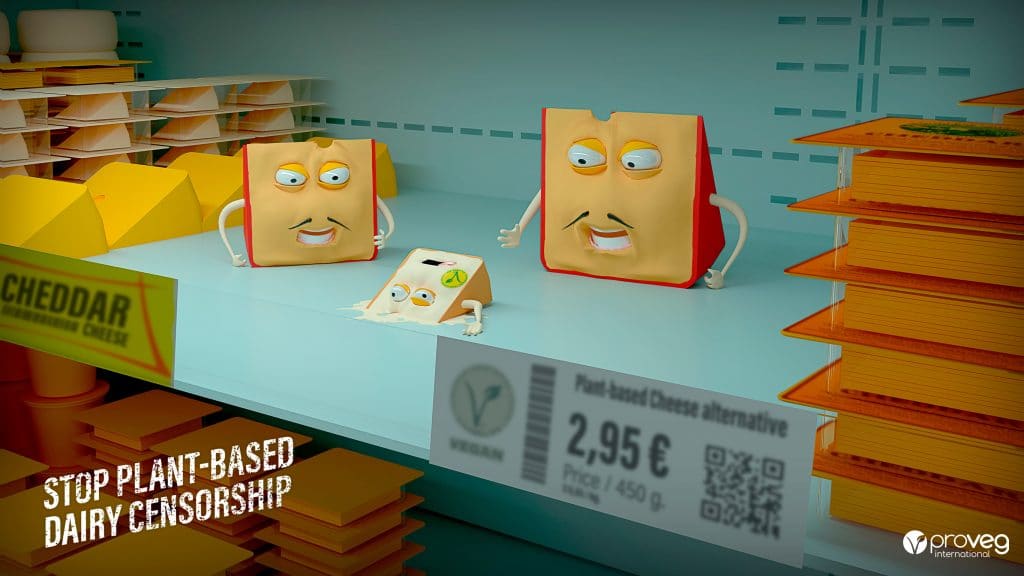 ProVeg International, Oatly and Upfield have launched a petition to stop Amendment 171 on the grounds of plant-based censorship.

The plant-based community has voiced concerns about further censorship of the plant-based sector. Such restrictions would make it more difficult for consumers to choose plant-based foods in spite of ever-increasing demand, and also threaten consumers’ right to information and companies’ right to fair competition. Amendment 171 also directly interferes with the EU’s vital sustainability efforts such as the Green Deal.

The European plant-based-dairy sector is already prohibited from using terms like ‘oat milk’ and ‘soya yoghurt’. This amendment, which effectively amounts to censorship of the plant-based sector, would dramatically expand those restrictions by prohibiting any use of ‘evocations’ of dairy products on plant-based packaging or in advertising. If implemented, plant-based brands could even be prohibited from using images of their own products. Amendment 171 could also ban factual disclaimers such as ‘does not contain milk’.

“This goes directly against the EU’s intent to promote more sustainable food production and makes it more difficult for consumers to choose plant-based options,” says Oatly’s Cecilia McAleavey, Director of Public Affairs and Sustainable Eating. “Given the climate crisis, it’s irresponsible to try and prevent us from encouraging people to make the switch to plant-based and help protect the planet in the process. People are not stupid – everyone understands that this is an attempt by the dairy lobby to hinder the shift towards sustainable plant-based eating.”

In practice, this could prohibit the following:

ProVeg International’s global campaign to stop the ‘veggie burger ban’ made headlines around the world. As a result, MEPs responded to public pressure and voted against the ban, known as AM165. However, while the world talked about veggie burgers, 386 MEPs, or 54%, voted in favour of amendment 171.

Censoring the plant-based-dairy sector not only contradicts the EU’s public-health goals and the promotion of healthy diets – it sits in direct opposition to the sustainability objectives of the European Green Deal and the Farm to Fork Strategy. If implemented, it would pose a substantial threat to the climate goals of the Paris Agreement as well as distorting the competition between traditional food companies and companies that produce plant-based alternatives.

Jasmijn de Boo, Vice President of ProVeg International, said: “It is baffling to once again be forced to justify sustainability. Why would we sabotage innovation? Who will benefit? Green energy is no longer being stifled or opposed, so why are we still suppressing and censoring sustainable food production, given the urgency of the situation? Who stands to lose here? We need to adapt across every part of our food chain if we’re to tackle the climate crisis. Genuinely sustainable food production must be enabled. How will we reach our climate goals if we allow the influence of powerful but unsustainable industries to determine our collective fate?”

The cultural importance of dairy – and particularly cheese – in certain countries is not to be undermined. Rather than hindering the inevitable and necessary shift to plant-based eating, the dairy industry should be using traditional artisanal methods to embrace sustainability, much as numerous actors in the meat sector are doing with plant-based meats.

“Food policy should be formed in the interests of consumers, environment and health. This amendment goes against all three,” says Dr Jeanette Fielding, Chief Corporate Affairs and Communications Officer at Upfield. “Making it illegal to name, package and depict plant-based foods in the way we have done for over 100 years is a serious step backwards. Consumers are looking for strong EU leadership on climate and environment. That means tearing down bureaucratic barriers to sustainable and healthy eating, not building them higher.”

ProVeg International
ProVeg is an international food awareness organisation working to transform the global food system by replacing conventional animal-based products with plant-based and cultured alternatives. ProVeg works with international decision-making bodies, governments, food producers, investors, the media, and the general public to help the world transition to a society and economy that are less dependent on animal agriculture and more sustainable for humans, animals, and the planet. ProVeg has permanent-observer status with the UNFCCC, is accredited for UNEA, and has received the United Nations’ Momentum for Change Award. www.proveg.com

Oatly
Oatly is a world leader in the global sustainability movement, promoting the benefits of plant-based eating from both a nutritional and sustainability standpoint, in order to create positive societal change. The company was founded in the 1990s and is based on original scientific research from Lund University. Today, the company offers a broad range of nutritious and sustainable oat-based products which utilise a patented enzyme technology that copies nature’s own process and turns fibre-rich oats into nutritious liquid food designed specifically for humans. Oatly currently employs about 800 people throughout Europe, North America, and Asia, with global headquarters in Malmö, Sweden, and regional offices in New York, London, Berlin, Amsterdam, Helsinki, Shanghai, and Hong Kong. www.oatly.com

Upfield
At Upfield, we make people healthier and happier with great tasting, plant-based nutrition products that are better for the planet. As a global plant-based company, Upfield is the leading  producer of plant-based spreads and cheeses, with more than 100 brands, including iconic brands Flora, Rama, Blue Band, Proactiv, Becel, I Can’t Believe It’s Not Butter, Country Crock and Violife. With headquarters in Amsterdam, we sell our products in over 95 countries and have 15 manufacturing sites throughout the world. The company employs over 4200 Associates. Since 1871, we have been the authority in the spreads category, which gives us unmatched experience, know-how, and inspiration. We are focused on leading in this new era and delivering healthier, superior quality products that are great tasting and help us deliver on our mission to create a “better plant-based future.” For more information, please visit our website at www.Upfield.com.