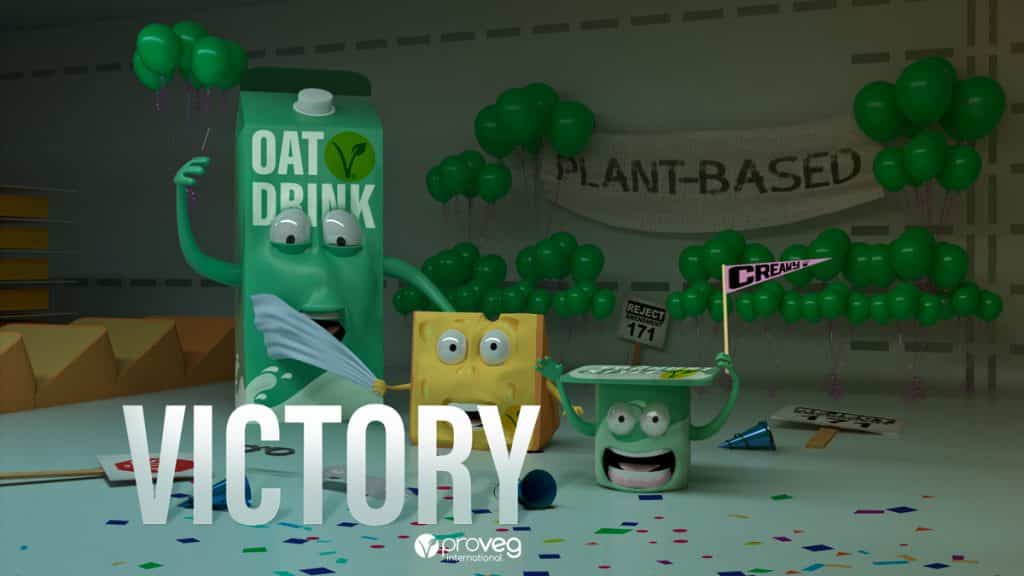 The European Parliament, The European Council and The European Commission have rejected Amendment 171, the climate-hostile food regulation challenged as an attack on sustainability by nearly half a million consumers in a petition started by ProVeg International.

Leading NGOs, including Greenpeace and WWF, as well as Greta Thunberg and plant-based companies such as Upfield, Oatly, Nestle, and Alpro, joined ProVeg in a landmark sustainability battle on the grounds of ‘plant-based dairy censorship’.

The decision reflects scientific consensus, one that has been publicly endorsed by the IPCC, the FAO, WHO, and the EAT-Lancet Commission, all of whose recommendations are unanimous on the urgent need for a move towards plant-based diets.

“This is a common-sense victory. Citizens, industry and experts have spoken and the EU listened. It would be absurd to censor plant-based products at the same time as telling consumers to switch to a plant-based diet. Imagine censoring electric cars or recycled paper. We applaud the EU for its clear-sightedness under immense pressure from environmentally reckless interests.” Jasmijn de Boo, Vice President, ProVeg International

In a critical turning point for healthy, sustainable diets in Europe, Amendment 171 – the draft legislation which sought to impose severe new restrictions on plant-based foods, proposed by the European Parliament’s AGRI Committee – has been dropped, ahead of the EU’s super trilogues. The European Green Deal, and its sustainable-food roadmap, the Farm to Fork Strategy, represent Europe’s progressive climate priorities. However, AM171 directly contradicted Europe’s own sustainability goals, inviting environmentally reckless lobbying by the meat and dairy industries.

“There is a broad consensus among food, dietetics and nutrition authorities, and international organisations that, for both health and environmental reasons, our diet should include more and more plant-based products and less and less animal-based products.” Consumer and User Confederation

The European Parliament, the Commission, and the Council of Ministers began the trilogue negotiations, which cover topics under Common Organisation of the Markets in Agricultural Products (CMO), on 21 April. Negotiations related to CAP and CMO started in November 2020, with AM171 announced shortly after a public commitment to reduce GHG emissions by 55% by 2030. The Amendment was not subject to the normal process of public scrutiny via an impact assessment or open consultation, prompting an outcry from consumers and the plant-based sector. The regulation would have only affected the plant-based sector.

Widely condemned in the lead-up to the decision, the amendment was called out by an extensive and diverse group of stakeholders, including:

Now, the EU has refused to endorse an anti-competitive and environmentally reckless policy, that would introduce a raft of new restrictions to plant-based dairy alternatives (already the most highly-restricted food category in the EU).

‘As a founding member of the European Alliance for Plant-based Foods, tackling anti-competitive legislation has always been top of our agenda. For the past few months, Upfield has been a vocal opponent of Amendment 171 and today’s decision to reject it is a win for the plant-based food industry and for all those people who signed the petition to pledge their support.” said Dr Jeanette Fielding, Chief Corporate Affairs and Communications Officer, Upfield. “But the battle is not won. Justice for consumers and for our planet will only be achieved when plant-based foods are given fair treatment with animal-based foods under the law.”

The implications of AM171 were that the following would be prohibited:

“We welcome the decision to reject amendment 171. It is essential and time-critical to focus on removing legal obstacles hindering the shift towards a sustainable food system, not introducing new ones. Science shows how important it is to shift to plant-based diets to tackle climate change and public health challenges. Given that we have only nine years to meet the goals of the Paris agreement, we all need to focus on how we can accelerate the shift and make it easier for consumers to choose plant-based options,” said Cecilia McAleavey, Director of Public Affairs and Sustainable eating at Oatly.

“Europe has spoken. The climate crisis is its top priority and it will not allow an anti-competitive, environmentally reckless policy, introducing a raft of new restrictions to plant-based alternatives to dairy (already the most highly-restricted food category in the EU). AM171 would have set a dangerous precedent but Europe has sent a clear message to the rest of the world and chosen the planet over politics.” said Jasmijn de Boo, Vice President, ProVeg International

At Upfield, we make people healthier and happier with great tasting, plant-based nutrition products that are better for the planet. As a global plant-based company, Upfield is the leading  producer of plant-based spreads and cheeses, with more than 100 brands, including iconic brands Flora, Rama, Blue Band, Proactiv, Becel, I Can’t Believe It’s Not Butter, Country Crock and Violife. With headquarters in Amsterdam, we sell our products in over 95 countries and have 15 manufacturing sites throughout the world. The company employs over 4200 Associates. Since 1871, we have been the authority in the spreads category, which gives us unmatched experience, know-how, and inspiration. We are focused on leading in this new era and delivering healthier, superior quality products that are great tasting and help us deliver on our mission to create a “better plant-based future.” For more information, please visit our website at www.Upfield.com.