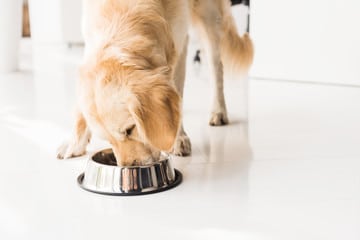 A ground-breaking new study funded by ProVeg International has found that the healthiest and least hazardous food for dogs is provided by a nutritionally sound vegan diet.

The study, published in leading, peer-reviewed science journal PLOS ONE, was carried out by a team of researchers in the UK and Australia and represents the first large-scale investigation of its kind into the health outcomes of dogs.

Involving over 2,500 dogs, it compared the health outcomes of dogs on a conventional diet compared to those on raw meat diets and those on vegan pet food.

“Research on this scale about dogs is the first to be published and clearly demonstrates that  the healthiest and least hazardous diets for dogs are nutritionally sound vegan diets,” Professor Andrew Knight, who led the research team, said.

Food awareness organisation, ProVeg International, supported the researchers with a grant to allow them to survey dog owners and analyse the results over the course of a year.

“It is vital to have this added to the scientific database as pet owners are very concerned that their pets’ nutritional needs are fully met in the pet food they buy,” Stephanie Jaczniakowska-McGirr, International Head of Food and Retail for ProVeg International, said.

“This study goes a long way towards removing the uncertainty about the value of a vegan pet food diet,” Jaczniakowska-McGirr added.

Vegan pet food producer, OMNI, which also received ProVeg support as a start-up company through the ProVeg Incubator programme, welcomed the outcome of the study.

Shiv Sivakumar, co-founder of OMNI, said: “”It’s really encouraging to see such positive scientific results emerging in support of plant-based diets for dogs. It always made sense to us at OMNI that removing processed meats from our dogs’ diets and replacing them with high quality, plant-based ingredients can only bring about a positive impact, but it’s great to see that the science is now there to validate our hypothesis.”

How the study was conducted

The researchers then examined seven general indicators of ill health:

The main conclusions were that dogs fed conventional diets appeared to fare worse than those fed either of the other two diets.

Whilst dogs fed raw meat appeared to fare marginally better than those fed vegan diets, the dogs fed raw meat were younger, which has been demonstrated to be associated with improved health outcomes. Non-health related factors, analysed within the study, may also have improved apparent outcomes for dogs fed raw meat, for 3 out of 7 general health indicators studied.

The researchers also considered the prevalence of 22 specific health disorders, based

on predicted veterinary assessments. The percentages of dogs in each dietary group considered to have suffered from health disorders were 49% (conventional meat), 43% (raw meat) and 36% (vegan).

“Accordingly, the pooled evidence to date indicates that the healthiest and least hazardous dietary choices for dogs are nutritionally sound vegan diets,” the study concludes.

Two other papers by the research team related to this field were published last year: one in PLOS ONE and the other in REDVET.

The former study involved 4,060 dog and cat guardians and found that pets enjoyed vegan food as much as they did meat-based food. The latter study looked at the nutritional soundness of meat-based and plant-based foods.