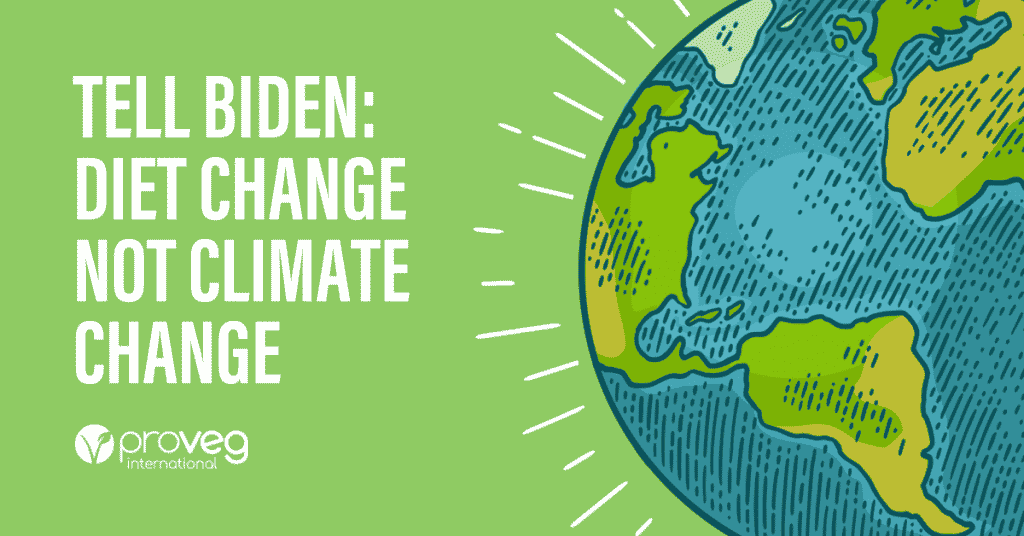 ProVeg International has launched a petition asking President Biden & Special Envoy for Climate Change John Kerry for “diet change, not climate change”, asking for a call for a shift to a plant-centered food system amidst the global climate crisis.

Biden’s Climate Summit on April 22nd will bring together world leaders from across the globe and serves as almost the reintroduction of the US back into solving the climate crisis. Last year, Biden stated that “climate change is the number one issue facing humanity,” and 64% of U.S. adults agree with him. With the US officially back in the Paris Agreement and a renewed focus on the climate crisis, leadership from Biden on this issue is needed now more than ever. Ahead of Earth Day, ProVeg International is urging the Biden administration to prioritize plant-centered agriculture to meet its ambitious climate targets.

The livestock sector already accounts for more than 14% of global greenhouse gas (GHG) emissions while the demand for animal protein could increase massively by 2050 due to a growing population and rising incomes. Shifting away from resource-intensive, animal-centered diets and towards more plant-rich ones has been identified as one of the most impactful solutions for mitigating climate change, reducing pandemic risks, tackling food waste, and supporting regenerative farming communities. The 2019 Special Report on Climate Change and Land by the International Panel on Climate Change (IPCC) insists that reducing the consumption of animal products is key to achieving the Paris Agreement

“To discuss environmental crises without centering food production is to wilfully avoid the facts,” said Michael Webermann, US Executive Director of ProVeg International. “What we eat affects not just climate change, but the biggest issues facing the planet, including pandemic risks, deforestation, antibiotic resistance, and food insecurity. For instance, the FAO tells us that if 40 percent of all crops produced for feeding animals were used directly for human consumption, we could feed 9 billion people (by 2050). One has to ask when policy will reflect the urgency of this situation?”

Despite this, the newly-released $2 trillion infrastructure proposal includes no support for animal-free food technologies or transitioning farmers from animal to plant-based agriculture. We ask the Biden administration to include plant-based food system targets in all its domestic infrastructure, climate, and agricultural policy proposals in order to set a global example, and to include these targets in all Paris and COP26 discussions, ultimately seeking a 50% reduction in animal production by 2040.

Webermann continued, “Yes, we are facing a terrifying prospect in climate change, but in diet change lies a real solution. Plant-centered diets, if adopted by many, could be the key to this crisis. We have scientific consensus. Biden’s plans must reflect it.”

ProVeg International
ProVeg is an international food awareness organization working to transform the global food system by replacing conventional animal-based products with plant-based and cultured alternatives. ProVeg works with international decision-making bodies, governments, food producers, investors, the media, and the general public to help the world transition to a society and economy that are less dependent on animal agriculture and more sustainable for humans, animals, and the planet. ProVeg has permanent-observer status with the UNFCCC, is accredited for UNEA, and has received the United Nations’ Momentum for Change Award. www.proveg.com