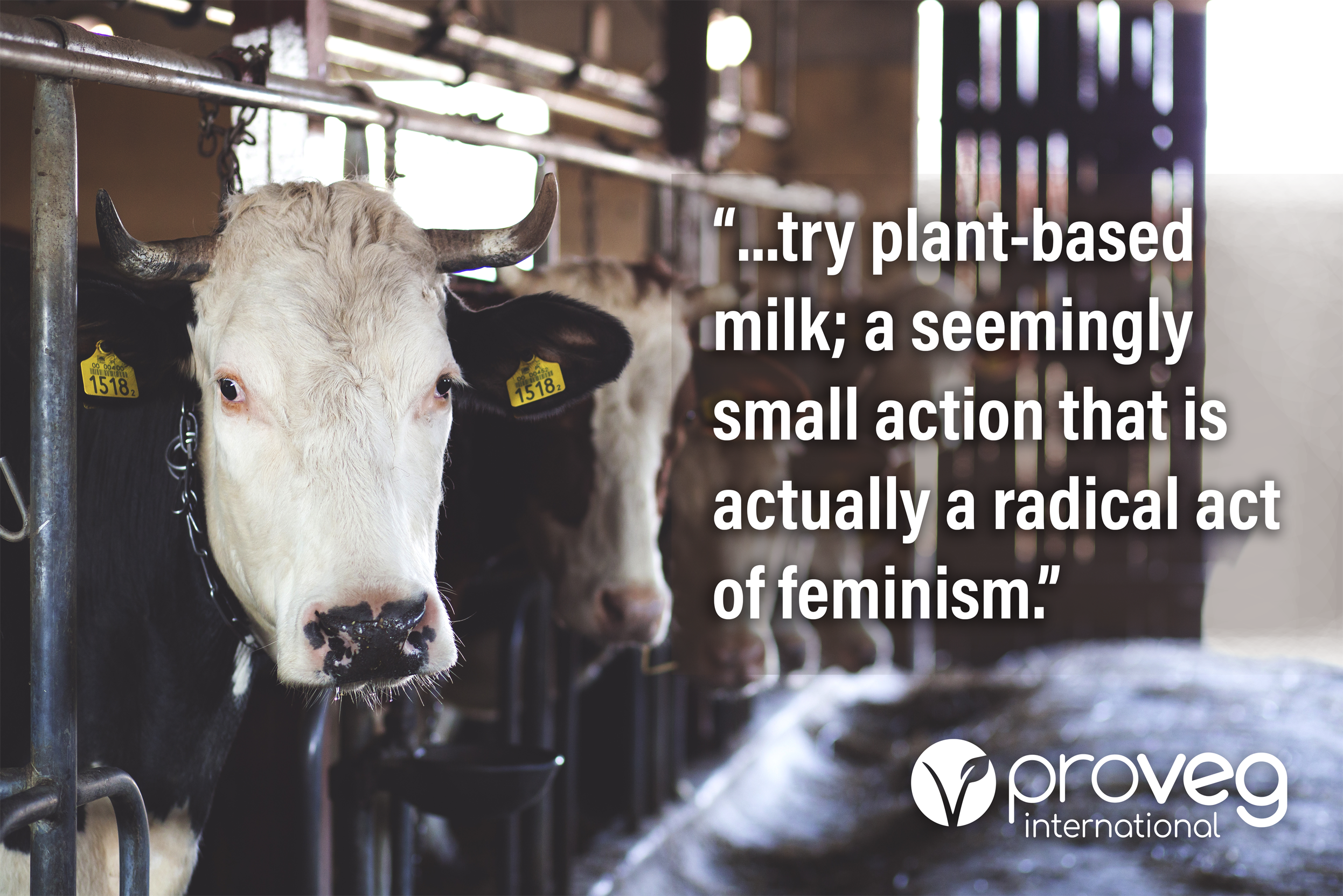 I have been engaged in the feminist movement for a number of years now and it was specifically during the arrival of our beautiful baby girl in 2015 that I felt empowered to make our home and lives a place where she could truly grow, free from oppression and gender biased expectations. It was only in 2016 when I turned to a plant-based lifestyle that I realised how imperative it was to fight for all female oppression, not only that of my own species.

My pregnancy felt like a long, hard and challenging slog, I felt exhausted and lacking in energy on a daily basis. The small pots of joy in my pregnancy were in the moments of remembering that my amazing, powerful body was creating life, make another human being from scratch… what!? I felt empowered by my body, by my innate ability to create life – granted it blew my mind and so I would then need a lie down or quick nap to recover…

In 2016 it was my sister who nudged me in the direction of veganism and it was the dairy industry which pulled at my heart. I was sitting with my baby in my arms witnessing an industry where mothers have their babies taken away and it hit me – how on earth could I justify contributing to an industry that so explicitly exploited this amazing ability to create life?

Before my own experience of being a milk producing Mum, it had never occurred to me that a cow would need to give birth in order to produce milk, just like humans. I think I had always assumed that milk was in some way a by-product of all cows; pregnancy didn’t cross my mind. In the UK, dairy cows are continually and forcibly impregnated throughout their lives and if this isn’t traumatic enough, having endured the exhaustion of pregnancy time and time again, their babies are taken away, often within hours of them giving birth. Their babies will either be immediately killed, raised for veal if male or, if female, begin the same short life of exploitation as their Mum. This process is repeated until the cow is ‘spent’ – an industry term defined as ‘having been used and unable to be used again’ and sent to slaughter for the beef industry. Cows would typically live until they are between 15 and 20 years old but will live only 5 or 6 short years due to the physical demands of the continual pregnancies and over-milking which follows.

The agricultural industry is without doubt an extreme form of exploitation of the female reproductive system. Both movements, feminism and veganism are full of strength, compassion, power and equality, and for me exist in complete alignment. Being female is amazing, our bodies have the ability to create life and feed that life with this same body, again… what!? I have so much respect for my body and all that it has produced and feel a sense of duty to myself to eat wholesome, healthy, plant-based foods which will enable my body to thrive. It is vital that we take care of our bodies and if the support for the animals wasn’t enough, there are strong links between dairy consumption and an increased risk of breast cancer.

Let us celebrate the amazing strength in this ability to bear a child, acknowledge the similarities in these social justice movements and fight for the rights of all females; not just those in our own species. Join me this International Women’s day and try plant-based milk; a seemingly small action that is actually a radical act of feminism.

If you don’t already please follow and like us on social media, and most importantly #JoinTheMovement #ProJustice