Is the Game Changers really a game changer for the plant based movement? 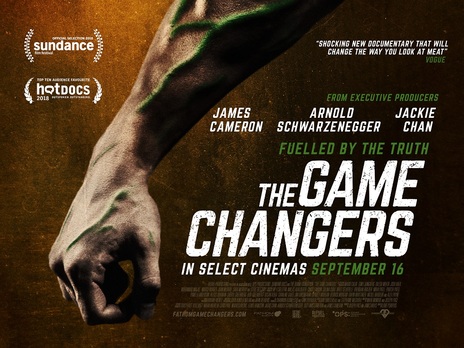 This week saw the long awaited release of new feature length documentary, The Game Changers, produced by and starring an amazing line up of ‘A List’ plant based celebrities and athletes.

With James Cameron as Executive Producer along with Arnold Schwarzenegger, Lewis Hamilton, Novak Djokovic and Jackie Chan, amongst others, this documentary was always destined to be noticed. The Game Changers bills itself as ‘a revolutionary new documentary about meat, protein and strength’. It seeks to break the ‘protein myth’ and answer the frequent question that those following a vegan/plant based diet get asked almost daily….. so, where do you get your protein?

The film tackles this by profiling high profile athletes (including Olympians, NFL players, boxers, weightlifters and bodybuilders), everyday heroes including Schwarzenegger, Formula 1 Champion Lewis Hamilton and the world record holding strong man Patrik Baboumian, and leading scientists. The film follows former Ultimate Fighter and elite Special Forces trainer, James Wilks, as he travels the world to uncover the optimal diet for human performance. What he finds may surprise many people who have been told again and again by friends, family, and society as a whole, that eating meat gives humans strength and performance. He finds that the most optimal diet for performance and athletic recovery is one which is fully plant based.

As we travel with Wilks on his journey, we meet elite athletes, firefighters and soldiers, and we learn that plant based diets do far from damage performance, in fact, it’s the opposite. All the athletes featured tell explicitly how the change to a plant-based diet dramatically increased their performance and we witness mind-blowing feats of strength and performance.

The film also forces us to rethink other things we thought we knew. It shows how science is now discovering that Roman Gladiators were likely predominantly vegetarian, that our teeth are specifically not for eating meat, that our bodies process meat ineffectively and that plant protein is better than animal-based protein.

One quote from the documentary sticks out from strongman Patrik Baboumian: “One person asked me how can you get as strong as an ox without eating meat? And my answer was, have you ever seen an ox eating meat?”

Another issue that film tackles well is the concept of ‘meat and masculinity’ and it breaks the old-fashioned concept that ‘real men eat meat’. This seems to be the first time this has been tackled on the big screen and the audience is shown adverts and narrative from the recent past that actively serves to reinforce these stereotypes. We also learn how meat and dairy has been explicitly marketed to us as macho, good for us, and that it will make us strong and the film goes back to the exact source of that original myth and how since then it has been completely debunked by science.

So why The Game Changers and why now?

It seems that increasingly people are waking up to the benefits of plant-based diets and/or reducing their reliance on meat. Many of us are already aware that the production of meat is inherently cruel to animals, and inherently inefficient. The film tells us that animals just act as a middleman or carrier, including for protein and we learn that all protein comes from originally from the land. Likewise, it feels as if more of us are aware of the huge environmental impact of animal agriculture and the link to animal agriculture, land loss and Greenhouse Gas emissions, but these facts alone aren’t always enough for people to think about reducing or eliminating their meat consumption in a society that has programmed us that meat is good. There are often other reasons why people may fear going plant based or drastically reducing meat intake, linked to concerns over health (which ironically is the opposite issue), protein and performance. The Game Changers is going to change the way we look at meat.

Whilst currently on limited cinema release globally, it’s likely that not many ‘mainstream’ audiences will see the film, until it hits Netflix or Amazon, and that’s when change can happen. Whether you eat meat, or whether you don’t, The Game Changers is a fascinating and eye opening film for all.

At ProVeg we work with a variety of stakeholders to help people eat less meat, without only benefits, not sacrifice, working towards our mission to create a reduction in global meat consumption of 50% by 2040.

ProVeg welcomes and supports films like The Game Changers which bring the message of meat reduction to wide and new international audiences. You can  learn more about ProVeg at http://www.proveg.com and about The Game Changers at https://gamechangersmovie.com.