ProVeg International has launched a petition to stop Amendment 171, to ban the use of dairy-related terms in reference to plant-based dairy alternatives, supported by several NGOs and leading names in the food sector.

AM171 will be discussed as part of the CMO trilogues scheduled to start on January 27th. In spite of existing restrictions on the plant-based sector including a ban on using terms like ‘oat milk’ and ‘soya yoghurt’, the new amendment would go even further.

The new law would prohibit any use of ‘evocations’ of dairy products on plant-based packaging or in advertising. The ban could even prohibit brands from using images of their own products or applying factual disclaimers such as ‘does not contain milk’.

The plant-based community has voiced concerns about further bans being placed on the plant-based sector. Such restrictions would make it more difficult for consumers to choose plant-based foods in spite of ever-increasing demand, and also threaten consumers’ right to information and companies’ right to fair competition. Amendment 171 also directly interferes with the EU’s vital sustainability efforts such as the Green Deal.

Banning the use of recognisable names for plant-based dairy alternatives not only contradicts the EU’s public-health goals and the promotion of healthy diets – it sits in direct opposition to the sustainability objectives of the European Green Deal and the Farm to Fork Strategy. If implemented it would pose a substantial threat to the climate goals of the Paris Agreement.

It is baffling to once again be forced to justify sustainability. Why would we sabotage innovation? 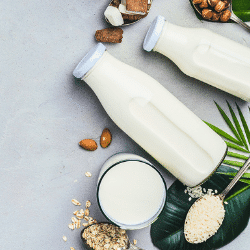 Following last year’s successful ‘Stop The Veggie Burger Ban’ campaign ProVeg International has launched a petition to stop Amendment171 on the grounds of plant-based censorship, supported by NGOs and leading names in the food sector.