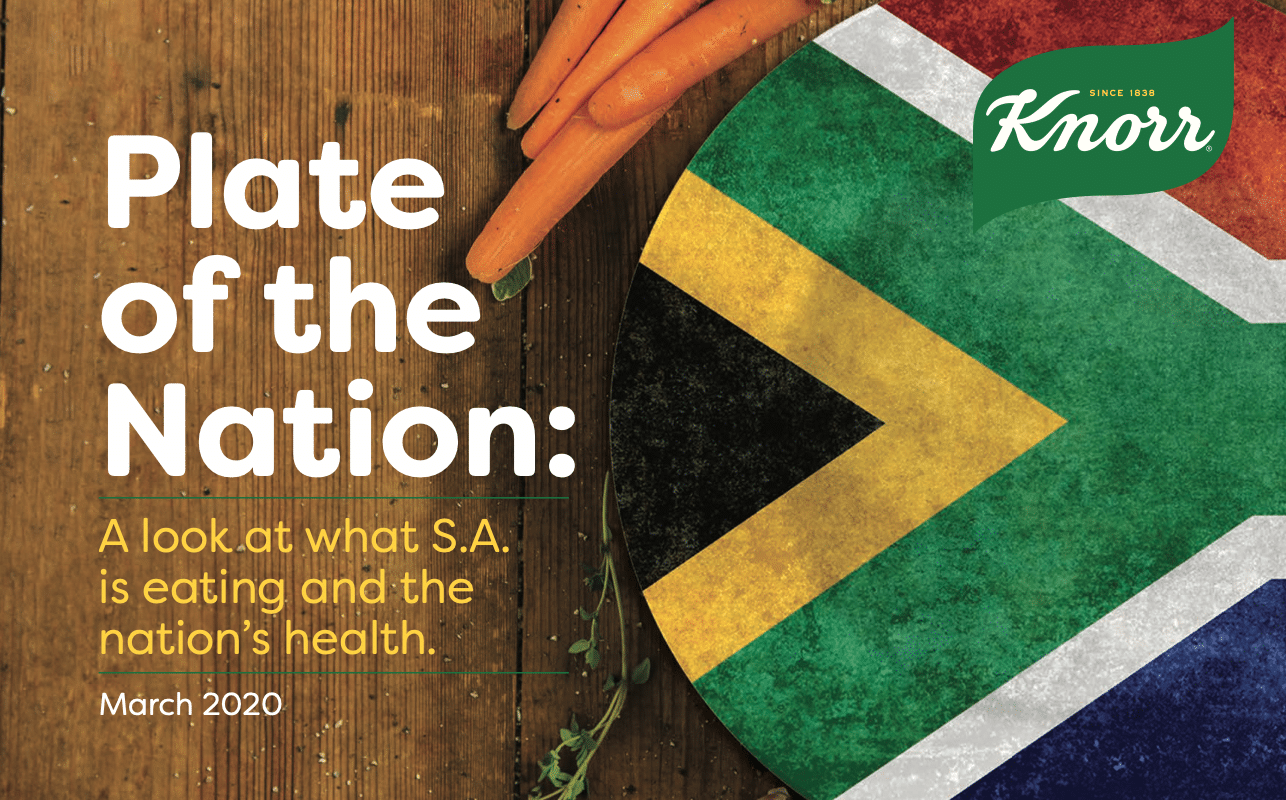 Our country is labelled as the unhealthiest nation on the planet. This is largely as a result of a poor diet that leads to chronic metabolic conditions and increases the risk for infectious disease. Knorr recognises the urgency of supporting South Africans to improve their diets with high quality, delicious and affordable ingredients. With collaboration and investigation, Knorr is positioning themselves to lead the charge to fix the broken food system by reinventing food for South Africa. This begins with understanding the current Plate of the Nation.

Knorr reports on The Plate of the Nation

In efforts to help South Africans move towards a better food future, Knorr teamed up with Nielson to investigate how & what the nation is eating and how it impacts the health of our country.

South Africa is also known as the “Rainbow Nation” for its colourful diversity of cultures, ethnicity and customs. This research was conducted amongst a nationally representative sample of the SA population, with the purpose of understanding the composition of the plate of the nation across different demographics.

This annual study was launched in February 2020, with the intention of creating a source of information that stakeholders can tap into in order to shape the health of the nation. Continue reading to discover the intricacies of what South Africans are putting on their plates and in their bodies.

South Africa has been labelled as the unhealthiest nation on the planet, with half of all South African adults classified as overweight or obese. According to Discovery, being obese increases your healthcare costs by as much as R4,400 a year for each person – a heavy burden on the cost of healthcare nationally. Childhood obesity is also on the rise due to inappropriate feeding practices for infants and young children.

Plate of the Nation offers insight into the South African food system by sharing current statistics about food security, safety and nutrition, economy and poverty, equity and fairness.

Total agriculture accounts for around a quarter of all greenhouse gas emissions, of which 60% is due to animal agriculture. Compared to plants, production of animal-based foods is more water and land intensive and emits more greenhouse gases.

Knorr reveals what South Africas plate of food looks like

Overall, bread with eggs and pap and meat is the most common meal eaten in South Africa.

ProVeg International provides basic suggestions on how to balance your plant-based plate over here.

The typical South African plate has a far greater proportion of meat and is lacking in vegetables. South Africans generally know what is healthy, but are not prioritizing healthy foods on their plate. Meat and starch are still “more important” to consume over vegetables. This research was conducted amongst individuals over the age of 16, but it is recognized that children are generally eating the same as their parents.

This plate will undergo changes with seasonal variation, with winter diets including more meat (73%) and starch (74%). Fruits and vegetables are more popular during the summer time.

South Africa has a meat eating culture with meat being eaten on an average of 4 times per week.  The vast majority, 84% of population, are meat eaters, with 90% of South Africans eating meat more than twice a week. On average, each South African eats more than 58kg of meat every year, compared with around 40kg in 1994.

One third of the participants responded that they do not replace meat with anything when it is not available. The most common meat replacement used is beans, followed by mushrooms, lentils, textured veg protein, soya and paneer. Meat substitutes are mostly used by self-proclaimed healthy eaters, flexitarians, females, and those living in KZN.

Starch is eaten before healthy vegetables

Top dishes tend to include meat, but are almost always centered around starch. Starch is eaten 6 times a week, far more frequently than fruits and vegetables.

Bread, Rice, Potatoes, Milie pap and Pasta are the most popular options. Only when starches are not available, do vegetables begin to play a bigger role in meals. Common replacements include green beans, cauliflower, white beans, eggplant and courgette.

Vegetables are leading the charge in terms of healthy eating

Majority of South Africans responded that they know healthy eating means eating a lot of vegetables, but vegetables are still under consumed and seen as far less important to include in a meal than meat or starch. Vegetables lack in frequency and in proportion to meat and starch.

It is not only what we consume during meal times that affects our health, but what we snack on in between meals. 70% of South Africans admit to snacking between meals, with “non-healthy” eaters indulging in chips and fizzy drinks, and the “healthier” crowd enjoying dried fruit, nuts, yoghurt and cheese.

Snacking in between meals offers a handful of opportunities per day to eat processed sugars and trans fats. Consumption of soft drinks has risen to more than 68% in our country, and the overall consumption of processed sugar has increased by almost 33% since 1999. This has occurred alongside the steady increase of obesity and lifestyle disease in South Africa.

One third of South Africans responded that they did not know what a plant-based diet is. This begs the question of where they are receiving nutritional information, and 62% state that they are receiving information from family and friends. Half of those with acknowledged medical conditions also rely on health care professionals for advice.

As the world’ population expands, the question of how we can feed the world fairly and sustainably has never been more urgent. A plant-based diet can help to create a fairer world and a more sustainable food supply for all of us.

“The food we eat and how we produce it will determine the health of people and planet, and major changes must be made to avoid both reduced life expectancy and continued environmental degradation.”

ProVeg South Africa works to increase awareness of a plant-based diet, as well as accessibility to healthy plant-based foods on a national scale. The Plate of the Nation report offers critical insight into what our country is eating, and an annual review would suggest whether our organisation is making an impact on South African plates.

We recognize that Knorr is working towards a great food transformation by championing more plant-based diets and sustainable ways to grow and produce food. Find out how to increase your dietary diversity with environmentally friendly foods in Knorr’s Future 50 Foods report.