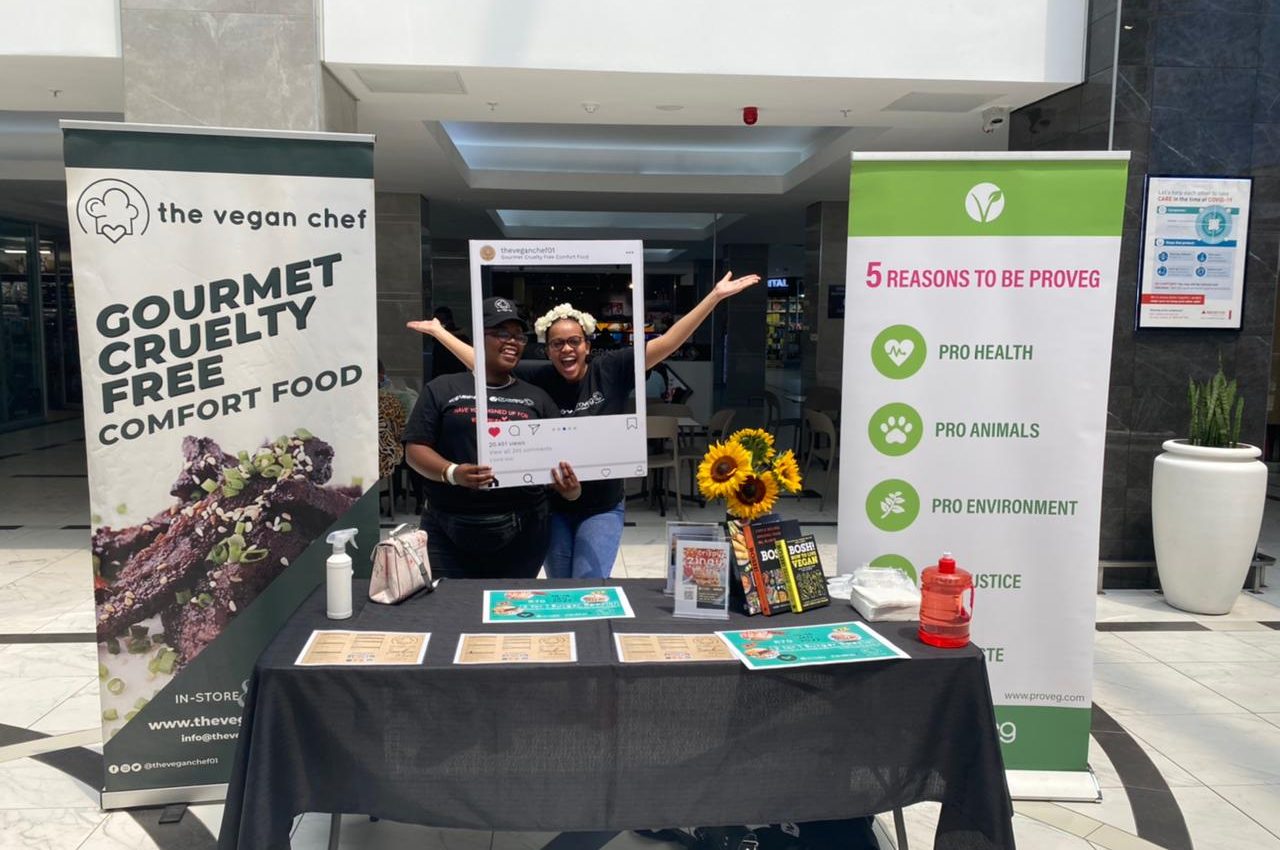 In the second week of January 2022, ProVeg Johannesburg joined The Vegan Chef (TVC) in gathering sign-ups for Veganuary with a delicious 2-for-the-price-of-one burger promo and a gorgeous pop-up sampling stand in Benmore Centre, Sandton.

Bite sized samples of The Vegan Chef’s famous Southern Fried Chikn went down a treat while Benmore shoppers signed up for the global Veganuary challenge. But who is the chef working with ProVeg to create a shift towards a plant-based lifestyle?

Meet The Vegan Chef, Sue Gajathar, whose bubbly, passionate personality is infectious as she talks about what she loves – creating vegan food and empowering women.

Five years ago, Sue was working in corporate finance when her husband turned vegan, and her life turned an unexpected corner. To support Jeshan on his vegan journey, Sue – who was raised vegetarian – signed up for Veganuary and started to feel the health benefits almost immediately. “I felt so energetic! I felt good, I looked good, my skin was better and all-in-all it was such a positive experience,” she says.

Sue started to experiment in the kitchen and saw how innovative a plant-based diet could be. She wanted to share this revelation with others, so she started a tiny food cart which she set up behind the Burger King in Sandton.

The response was overwhelmingly positive and, although Sue had no intention of expanding the business, the universe had other plans. To meet the demand, Sue opened the first vegan digital kitchen in Midrand. An international concept which relies on technology such as third-party ordering apps like Mr Delivery or Uber Eats to allow restaurants to expand without having to invest in physical properties and service staff, digital kitchens are taking the food service industry by storm.

As orders started to flow, Sue made the difficult decision to leave her corporate life behind and begin her vegan chef journey. She opened her first restaurant.

“That’s when the magic started because it allowed me to explore something completely different. At The Vegan Chef, we’re a very young team so we’re always coming up with something new. We’re always changing it up, pushing the boundaries.”

But just as the business boundaries were opening up, Covid hit and Sue was forced to innovate once again. Thanks to lockdown, a customer who had been travelling from Pretoria to Johannesburg to stock up on TVC products every week could no longer get her Chikn fix and asked if Sue could create a frozen range.

That night Sue started cooking up a storm in her Midrand kitchen, playing with ideas and recipes. From there, she created a frozen convenience range that effectively saved the business.

Expansion to her home province of KwaZulu-Natal was the next logical step and The Vegan Chef now has stores in Durban and Umhlanga, bringing the total number of stores (including the digital kitchen) to seven.

Aside from creating a happier planet, saving animals and promoting a healthier lifestyle, Sue strives to empower women. The majority of her staff are female, and Sue’s ambition is to train and upskill her employees, especially those from disadvantaged backgrounds. The energy and positivity of her staff is testament to Sue’s ambition to improve the lives of others and to further the careers of, specifically, South African women.

“The vegan community is quite small and I buy ‘local and lekker’ so that I can help to grow small businesses and create more employment for South Africans,” Sue enthuses. She carries a variety of products such as baked goods from Oumies Delights, sweets from Happy Sweets and ice cream from Mylk.

Sue is delighted that The Vegan Chef is one of the first accredited vegan companies to carry the proudly South African logo and she takes pride in the fact that none of her products come ‘from a box’. TVC is a vertically integrated business and all products from the famous Southern Fried Chikn to the Battered Vish are created from scratch in her kitchen in Midrand, so customers enjoy a gourmet vegan comfort food experience every time they bite into a TVC product. “My family eats what is produced in this kitchen,” says Sue, “so it’s very important to me that it’s healthy and wholesome.”

Being an entrepreneur during the Covid pandemic has been extremely challenging, but by pushing the boundaries and continually innovating, listening to suggestions from her staff and her customers, The Vegan Chef has not only survived but thrived. In fact, TVC recently won two awards at the LUXLife Global Vegan Awards 2021: Best Vegan Food Chain, South Africa and, for their Vegan Southern Fried Chickn, the Culinary Excellence Award 2021.

Interestingly, The Vegan Chef’s customer base is not entirely vegan because the tastes, cost and availability of products all make a plant-based lifestyle desirable and accessible. Specials such as two burgers for R70 draw in a wide variety of customers from businesspeople to students. The spices and flavours are authentic, unique and delicious and, as Sue says, “When you come to The Vegan Chef your palate will wake up because you are walking into vegan heaven.” From pies to Buddha bowls, milk tarts to waffles, pizzas to burgers, salads to saarmies, there’s something for everyone, even for the now frequently spotted gluten-free vegan!

Sue’s wish is to bring veganism to everyone, partnering with organisations such as ProVeg to expose a wider audience to her scrumptious products and, judging by the response at the Benmore Veganuary activation, her wish is not far away from being granted.

The Vegan Chef can be found in Sandton, Craighall Park, Midrand, Pretoria, Durban, Umhlanga and online.