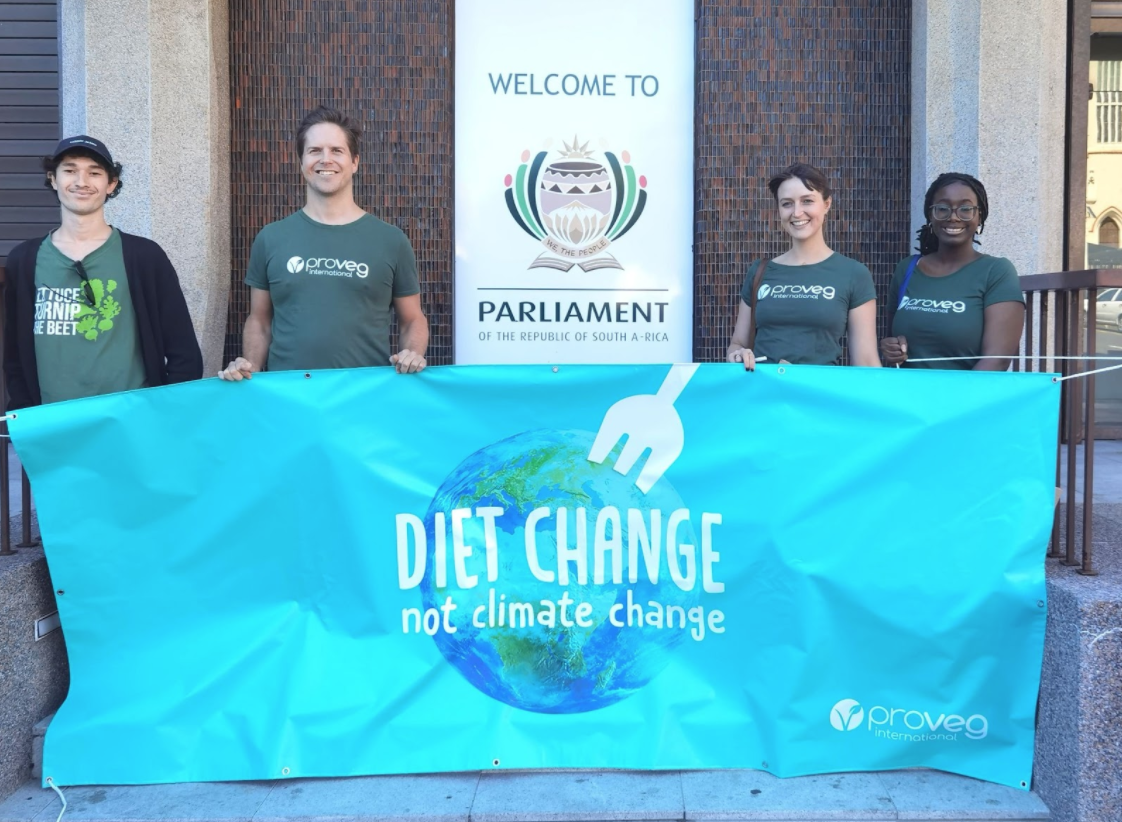 On Friday 25 March, youth and climate change activists across the world took part in the Global Climate Strike, organised by Fridays for Future (FFF), a youth-led and -organised movement that started in August 2018, when 15-year-old Greta Thunberg began a school strike for climate change.

ProVeg South Africa, the local branch of the food awareness organisation ProVeg International, attended the Global Climate Strike event outside the South African Parliament in Cape Town along with many other organisations like the African Climate Alliance, The Green Connection, Extinction Rebellion, and FFF South Africa.

This also marked ProVeg South Africa’s first activity in 2022 for their Diet Change Not Climate Change Campaign, their annual global campaign to create awareness and influence policy change regarding the devastating effects of animal agriculture on the environment. At the event, ProVeg South Africa encouraged the South African government to implement food systems and policy changes to move the country towards a more sustainable future.

Three of the primary facts that ProVeg highlights are:

While ProVeg focuses mainly on influencing the food system by engaging with the food industry and policymakers, they also believe that individuals have the power to make a difference without having to wait for business people and politicians to act.

Donovan Will, the director of ProVeg South Africa, believes that anyone who wants to help in the fight against climate change should consider starting by looking at the impact on the food they eat three times a day.

“So much of the climate change discussion is about fossil fuels, maritime and aviation transport, and creating carbon sinks. Most of us cannot directly influence these issues – but we can drastically reduce our individual greenhouse gas contributions by moving towards a more plant-based diet”.

ProVeg is by no means alone in this call. Earlier this month, the United Nations (UN) for the first time publicly acknowledged the link between animal welfare and environmental damage. This comes after pressure from various interest groups, including ProVeg International and more than 140 NGOs, that signed a joint letter used to urge leaders attending the United Nations Environment Assembly (UNEA) to place sustainable food systems and the damaging effects of animal agriculture on the environment at the centre of their agendas.

During UNEA, which took place in Nairobi, Kenya from 28 February – 2 March 2022, a resolution called the “Nexus between Animal Welfare, Environment and Sustainable Development”, was announced.

This resolution calls on the Executive Director of the United Nations Environment Programme (UNEP) to prepare a report exploring the link between the welfare of animals and environmental problems plaguing the planet.

Among the organisations that worked hard to bring the resolution to the table were World Federation for Animals, African Network for Animal Welfare, FOUR PAWS and Compassion in World Farming.