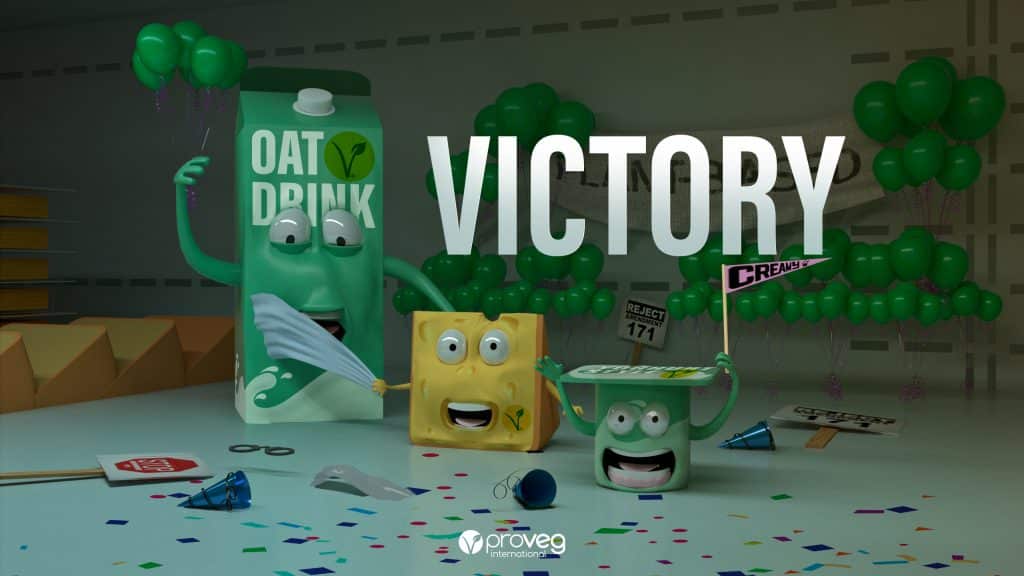 In a victory for common sense, the plant-based community, and the future of the planet, the EU’s  proposed ‘plant-based dairy censorship’ has been defeated.

The European Parliament, the European Council, and the European Commission rejected Amendment 171, which would have meant severe restrictions for plant-based dairy products. ProVeg International challenged the amendment as an attack on environmental sustainability and gathered support from nearly half a million consumers who signed our petition. We also worked extensively behind the scenes, monitoring the situation, speaking to key actors, and gathering support from organisations and companies across the plant-based sector.

ProVeg International called upon the European Council and the European Commission to reject Amendment 171 following the petition to ‘stop plant-based dairy censorship’ signed by more than 420,000 citizens and 100 organisations and companies active in 18 European countries.

In this successful fight against plant-based dairy censorship, ProVeg was joined by several leading NGOs, including Greenpeace and the WWF, as well as climate-icon Greta Thunberg and plant-based companies such as Upfield, Oatly, Nestle, and Alpro.

The defeat of AM171 is also a victory for democratic processes. Despite the fact that they were not initially consulted, citizens, industry, and experts have now spoken and the EU has listened. Talking about the defeat of the amendment, Jasmijn de Boo, Vice President of ProVeg International, said, “It would be absurd to censor plant-based products at the same time as asking consumers to switch to a plant-based diet. Imagine censoring electric cars or recycled paper.” De Boo applauded the EU for its clear-sightedness under immense pressure from environmentally reckless interests.

The dropping of this draft legislation, which would have imposed severe restrictions on plant-based foods, is  a critical turning point for healthy, sustainable diets in Europe. AM171 directly contradicted Europe’s climate goals, as expressed in the European Green Deal and  the EU’s Farm to Fork Strategy, and invited environmentally reckless lobbying from the conservative side of the meat and dairy industries.

Furthermore, the Amendment was not subject to the normal processes of public scrutiny, leading to an outcry from consumers and plant-based companies – who were not consulted, despite the fact that they constituted the sector that would have been affected by the legislation.

However, in the end, thanks in no small part to the work done by ProVeg, it was concern for a sustainable future, rather than the profits of the meat and dairy industry, that won the day.  “Europe has spoken”, said de Boo. ”Plant-based dairy alternatives are already the most highly-restricted food category in the EU. AM171 would have set a dangerous precedent – but Europe has sent a clear message to the rest of the world and chosen the planet over politics.”

“The plant-based industry is playing a vital role in the fields of environmental sustainability, human health and animal welfare and the EU must support its growth, not halt it.”

You stopped it from happening!

Let’s celebrate the fact that we avoided having to rename all the plant-based dairy products! We’ve won the battle – but the playing field for plant-based foods is still not level. Which means that we’ll carry on campaigning for healthier and more sustainable food policies in Europe and around the world.

We couldn’t have achieved this win without you, and we hope we can continue to count on your help. Please make a donation today to support us in this important and impactful work.

Thanks so much for helping us to limit the influence of the conservative dairy lobby and allowing common sense to prevail. Thank you, on behalf of the planet, the animals who live on it, and all those who are shifting to a plant-based diet.

Help us to continue with our impactful work.