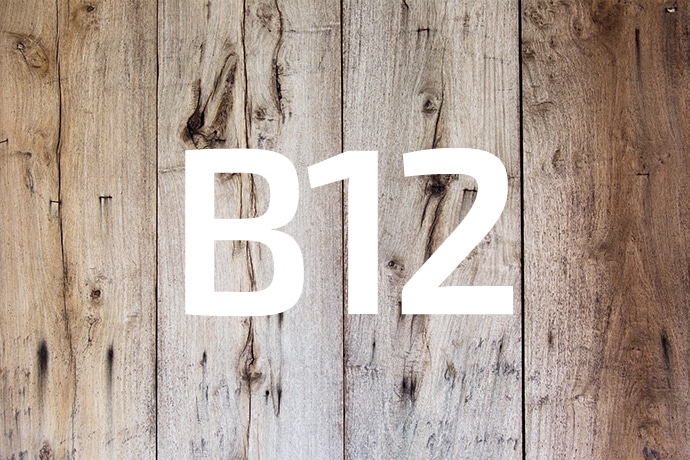 Vitamin B₁₂ is an essential vitamin that performs many important functions in the body. It is exclusively formed by microorganisms and must be ingested through food or dietary supplements. ProVeg explains how vegans and vegetarians can protect themselves against a shortage of vitamin B₁₂.

What is vitamin B12?

The term vitamin B12 is an umbrella term for the group of substances called cobalamins.1 Of these cobalamins, methylcobalamin and 5’‑deoxyadenosylcobalamin are the only two bioactive forms of vitamin B12, and act as coenzymes in the body.2 Two other cobalamins – hydroxocobalamin and aquacobalamin – are not coenzyme forms of vitamin B12 themselves but can be converted by the body into one of the two active cobalamins. The same applies to synthetically produced cyanocobalamin, which is used for most vitamin B12 supplements.3 However, metabolic or genetic disorders, as well as a lack of nutrients, can impair the conversion process.4 Cobalamins can only be produced by microorganisms such as bacteria.5

Functions of vitamin B12

The two coenzyme forms of vitamin B12 are essential components of two endogenous enzymes that occur in all cells and are involved in many metabolic reactions. Vitamin B12 plays an important role in the reproduction of DNA in cells as well as in the formation of new proteins. It also influences the nervous system’s overall health, the energy production of the cells, and the synthesis of the red blood protein haemoglobin.6

A lack of cobalamin leads to disturbances in cell division across the entire body. This mainly affects the formation of red blood cells, but also impacts on the oral and pharyngeal mucosa, as well as on the nervous system. A typical symptom of vitamin B12 deficiency is a form of anaemia which causes the red blood cells to become abnormally enlarged (megaloblastic anaemia). Characteristic signs include pale skin and mucous membranes and the regression of oral, tongue, and intestinal mucosa, as well as the subsequent impairment of nutrient uptake, along with non-specific symptoms such as general weakness, rapid fatigue, and dizziness.7 8 An insufficient supply of vitamin B12 also leads to increased blood concentrations of homocysteine, which represents a risk factor for the development of atherosclerosis and cardiovascular diseases.

The second set of symptoms caused by a deficiency in cobalamin is even more serious. These include damage to the central nervous system, which can manifest itself as sensory disorders (such as the feeling of ‘pins and needles’ in hands, feet, and other parts of the body), a lack of appetite, delayed reflexes, and reduced motor abilities, as well as impairments in movement coordination. Mental disorders, ranging from confusion or memory problems to psychoses and hallucinations, can also be signs of vitamin B12 deficiency.9 10 Both sets of symptoms can occur independently of each other.

Daily requirements of vitamin B12

While the recommendations for B12 intake vary between regions, the following daily doses are being recommended by the European Food Safety Authority (EFSA) for people on a Western diet:11

Absorption of vitamin B12

If vitamin B12 is supplied in very large amounts via oral consumption (at least 200 micrograms), about 1-2% of the dose can enter the blood via passive diffusion through the intestinal wall.15 However, absorption through the oral mucosa (for example, taken under the tongue or dissolved in the mouth) is at least as effective as oral vitamin B12 intake (swallowing directly). In the case of consumption via the oral mucosa, absorption also takes place via the intestinal wall due to partial swallowing, so long as the dose is sufficiently high.16

The intake of vitamin B12 – starting at a minimum dose of 200 micrograms – can therefore be calculated as follows:*

Approximately 60% of vitamin B12 (2000-5000 micrograms) is stored in the liver, with the kidneys being another important storage reservoir.17 Full stores of vitamin B12 in the body can suffice for 3-5 years.18

Causes of insufficient vitamin B12 intake

Insufficient vitamin B12 intake is caused mainly by the following:19

Vitamin B12 deficiency can also be caused by certain diseases. Chronic gastritis (inflammation of the gastric mucosa) or a gastrectomy (partial or total surgical removal of the stomach) can cause a deficit in the gastric intrinsic factor, which is crucial for the absorption of vitamin B12.20 21 The intake of vitamin B12 through fortified foods and orally consumed food supplements is severely hindered in people with these conditions.22 A sublingual (under the tongue) or intramuscular supply of vitamin B12 via injection is recommended in these cases (see section on vitamin B12 supplements). Medication can also have a negative effect on the uptake of vitamin B12.23

Vitamin B12 deficiency in the broader population

The major risk groups for vitamin B12 deficiency are vegans (and some vegetarians), the elderly,24 people with gastrointestinal diseases, and pregnant and nursing women25 – as well as alcoholics and smokers.

Vitamin B12: Occurrence and bioavailability in food

Most food of animal origin contains vitamin B12. To ensure a sufficient supply, animals such as pigs and chickens are given vitamin B12 via fortified feed.27 28 Ruminants may require to get additional cobalt (which is an important trace element and essential in the formation of vitamin B12), via fortified feed, especially if there is a deficiency of cobalt in soils.29 30 Occurrence in root and tuber vegetables or fermented foods such as sauerkraut and fermented soya products is possible, but not sufficient to make a significant contribution to vitamin B12 supply. Opposing opinions are not scientifically supported.31

Some plant-based foods are enriched with cobalamin. These include various soya products, muesli, cornflakes, fruit juices, and meat alternatives. Depending on the vitamin B12 content, vitamin B12 uptake can be improved by consuming these fortified foods, but this will not always cover daily requirements.32 Furthermore, EU law regarding organic production of food prohibits enriching organic food with vitamin B12. As such, organically-produced vegan food from EU countries does not contain cobalamin.33

If the holo TC II value alone is insufficient to determine whether a vitamin B12 deficiency exists, values for homocysteine (on an empty stomach) and methylmalonic acid should be determined via blood serum in addition to holo TC II. A vitamin B12 deficiency is indicated by increased levels of homocysteine (above 12 micromole/litre) and methylmalonic acid (above 260 nanomole/litre).35 The problem with vitamin B12-related anaemia is that it can be delayed or ‘masked’ by a high intake of folate – for example in vegetarian or vegan diets – because these vitamins collaborate in the process of cell division. At the same time, however, neurological changes will progress, possibly leading to permanent damage to the central nervous system.36

Vitamin B12 supply on a vegan/vegetarian diet

ProVeg tips for an optimal supply of vitamin B12