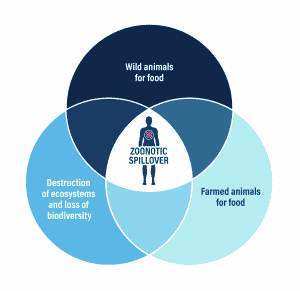 SARS-CoV-2, widely known as the coronavirus, has had a huge impact on all of our lives and changed the way we live – perhaps forever. But while it’s important to acknowledge the massive loss of lives and jobs and the impact of the virus on our global society and economy, it’s also vital to examine the root causes of the pandemic – and pandemics in general – if we are to minimise the risk of potentially far more damaging outbreaks in the future.

By exploring the crucial connection between the current crisis and our animal-based food system, the ProVeg Food & Pandemics Report highlights how our food choices help to create a recipe for zoonotic pandemics. By shifting to plant-based and cultured foods, we can help to minimise the risk of future pandemics as well as helping to resolve many of the other key challenges we face, including climate change, biodiversity loss, world hunger, antimicrobial resistance, and the rise of other food-related diseases.

The global response to COVID-19 has shown that we can respond urgently and collectively and that we can do so now. Together, we can change our food systems for a better, healthier, and more resilient world.

COVID-19 is a zoonotic disease, transmitted from animals to humans, that has turned into a global pandemic. It was first recognised in December 2019 and has since led to a large-scale shutdown of all aspects of life around the world. Its impacts are unparalleled in modern times, including a death toll in the hundreds of thousands as well as serious long-term socio-economic effects. It is unclear how long it will take for societies and economies to recover – or how it will change the world in the long run.

While most of the current focus is on the crucial aspects of emergency response and containment of the COVID-19 crisis, the Food & Pandemics Report explores risk mitigation and the prevention of future outbreaks by addressing the root causes of zoonotic emergence and spread.

Part I of the report explores the crucial connection between the current COVID-19 crisis and the global animal-based food system. It highlights how our food choices help to create a recipe for zoonotic pandemics that consists of three mutually reinforcing ingredients:

(2) The use of wild animals for food

Crucially, Part I demonstrates how the risk of future zoonotic outbreaks and the severity of their impacts increase with a surge in demand for animal-based products in today’s globalised world. The report strongly urges the transformation of the global food system in order to prevent future pandemics.

1. ZOONOTIC PANDEMICS: VIRUSES, ANIMALS, AND HUMANS IN A GLOBALISED WORLD

Zoonoses are diseases of animal origin that have spread to humans. Mounting evidence suggests that the increase in zoonotic events is directly linked to humans’ increasing interactions with animals, particularly in terms of food sourcing. Our appetite for meat, eggs, and dairy has brought us into ever-closer contact with both domesticated and wild animals by keeping ever more of them in increasingly confined spaces and invading ever more of their habitats. Together with the human modification of the environment, this increases the likelihood of viruses jumping the species barriers, resulting in new zoonotic diseases.

About 75% of all emerging infectious diseases in humans are zoonoses. Some of the most well-known zoonotic diseases include SARS, MERS, Ebola, rabies, and certain forms of influenza. Whether originating in wild animals, as is assumed with COVID-19, or in farmed animals, as is the case with avian and swine flu, they all pose serious threats to individual and global health – and already cause more fatalities than diabetes and traffic accidents combined.

COVID-19’s case-fatality rate of about 2% (as of December 2021) makes it about 20 times more deadly than regular flu – which is pushing healthcare systems worldwide to the limit. However, it is nowhere near as deadly as some other zoonotic diseases – such as H5N1 avian flu, with a fatality rate of up to 60%. Not only might future outbreaks be more dangerous, experts agree that they are also expected to be more frequent. The causes behind this alarming forecast are human-made – and the most central ones are all linked to our global food system.

2. THREE FOOD-RELATED ACTIVITIES THAT INCREASE THE RISK OF ZOONOTIC PANDEMICS

There are three human activities related to the eating and farming of animals that strongly increase both the risk of pandemics and the severity of their impacts. Intensified animal agriculture plays a key role, since it functions as a large-scale zoonotic incubator, as well as a contributor to environmental degradation, loss of biodiversity and climate change, and is the main driver of antimicrobial resistance.

Destruction of ecosystems and loss of biodiversity

We are living in the midst of the sixth mass extinction and are facing a rapid global loss of biodiversity. Our actions have heavily impacted more than 75% of the Earth’s land surface, significantly altering the prevalence and composition of its flora and fauna.

Animal agriculture is one of the key drivers of land-use change worldwide, as forests are cleared to provide space for feed crops and pastures in order to satisfy the increasing demand for meat. This leads to massive encroachments into natural habitats and biodiversity loss.

Additionally, climate change also contributes to the increased transmission of pathogens from animals to humans. One of the main drivers of climate change is animal agriculture, accounting for about 16% of global greenhouse gas emissions, while also being a major contributor to environmental degradation.

Fuelled by our food choices, our environmentally destructive activities bring us closer to wild animals and their often unknown pathogens. This creates favourable conditions for viruses to spread and ultimately enables the development of global zoonotic pandemics.

The processing of wild animals provides a gateway for novel pathogens. When handling, slaughtering, or eating wild animals, viruses present in the animals can jump the species barrier. Pathogens that have been transmitted to humans via using wild animals as food include the Ebola and Marburg viruses, HIV, the West Nile virus, and the coronaviruses which caused the global pandemics of SARS and MERS, as well as various strains of influenza. COVID-19 is the most recent result of zoonotic transmission from wild animals, probably involving bats and pangolins.

Many pathogens of concern to human health are transferred to humans from domesticated animals farmed for human consumption. Diseases such as diphtheria, measles, mumps, the rotavirus, smallpox, and influenza A all have their origin in domesticated animals.

The intensification of animal agriculture and aquaculture plays a key role and dramatically escalates the risk of zoonotic pandemics. Cramming large numbers of genetically similar individuals into unsanitary, high-density settings that induce poor health and high stress levels strongly increases the chances of pathogenic spillovers between wild animals and farmed animals – and, ultimately, humans. Industrial animal agriculture is much like a large-scale petri dish, providing the perfect conditions for viruses to emerge, spread, and cross species barriers. Each new factory farm increases the risk of the next virus spillover – along with the next zoonotic pandemic.

Owing to increases in population growth and prosperity levels, the global production of meat, eggs, dairy, and seafood from intensive-production facilities is forecast to increase by 15% by 2028.

While COVID-19 did not originate in factory farms or slaughterhouses, it has nonetheless found its way into them. With its multiple impacts, the current pandemic has demonstrated the profound vulnerability and fragility of the animal-agriculture industry, as well as a host of serious ethical and economic implications for humans, animals, and the food system.

3. THE FOOD-RELATED IMPACT OF PANDEMIC DISEASES AND OTHER FACTORS IS INCREASING

In addition to the risks of newly emerging pathogens, there are other factors that can further exacerbate the overall impact of zoonotic pandemics, as they all pose additional risks for individual health and healthcare systems. Again, they are all related to the eating and farming of animals.

Globally, antimicrobial-resistant infections currently claim at least 700,000 lives each year. The United Nations has declared antimicrobial resistance (AMR) a global health risk, stressing that this number could reach an annual toll of 10 million by 2050.

It is animal agriculture which is mainly responsible for the development of AMR. Globally, more than 70% of antibiotics (including those of last resort) are used on animals in intensive farming – in order to prevent losses owing to problematic breeding and husbandry conditions, and to accelerate growth and profits – rather than for the treatment of humans.

With multi-resistant strains of bacteria emerging at alarming rates, the world is on the cusp of a post-antibiotic era. Without effective treatment for secondary bacterial infections, future pandemics are poised to get worse, leaving health professionals helpless against a threat that we thought we had overcome.

As well as their involvement in the spread of viruses and the development of AMR, animal- based products also pose other direct health risks that can worsen the impact of a zoonotic pandemic. There is a host of communicable diseases that are associated with the production and consumption of animal-based products, such as Campylobacter, Salmonella, and E. coli – with many of them having already developed strains that are resistant to antibiotics.

While all eyes are currently on communicable diseases, it is important to note that, in many countries, the major burden on the healthcare sector and people’s quality of life usually lies elsewhere. In high-income countries, nine out of the 10 leading causes of death are non- communicable diseases. Statistically, chronic diseases constitute by far the greatest pandemic. And neither social distancing nor the recommended hygiene procedures can protect us from them.

There is mounting evidence that the development of diet-related chronic diseases, such as obesity, type-2 diabetes, and cardiovascular diseases, as well as some forms of cancer, is made more likely by the excessive consumption of animal-based products. All of these conditions constitute serious threats to individual and public health. Additionally, they put people in a high-risk group during a pandemic such as COVID-19, putting further strain on individual health and healthcare systems.

The recipe for disaster is surprisingly simple: one animal, one mutation, one human, and one point of contact is all that it takes for a global pandemic to become a reality and bring the world to a standstill.

This makes using animals as food – and intensified animal agriculture in particular – one of the most risky human behaviours in relation to pandemics, and the long-term survival of human society.

Making the connection between our outdated global food system and the current and potential future pandemic crises is a crucial first step towards acknowledging the root cause of pandemics and identifying solutions to prevent future outbreaks. Transforming the global food system by replacing animal-based products with plant-based and cultured alternatives provides a multiproblem solution – preventing not only future pandemics but also helping to mitigate major parallel crises such as climate change, world hunger, and antibiotics resistance.

Part II of the Food and Pandemics Report will detail the solution landscape, showcasing the encouraging developments that are already taking place, as well as emerging opportunities, and concrete calls-to-action – in order to inspire much-needed action among decision makers in the field of food-systems change.