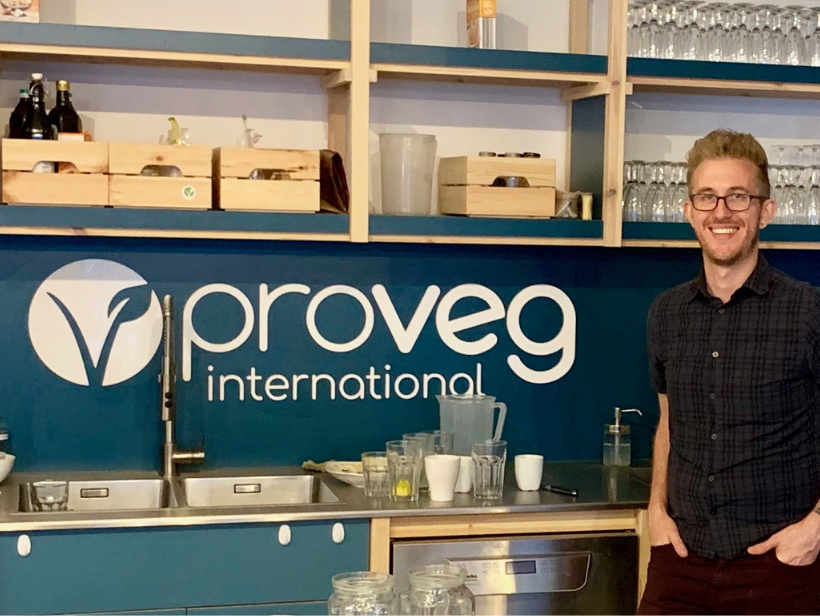 Michael visiting the ProVeg headquarters in Berlin earlier this month.

Michael Webermann is the Director of ProVeg’s newly-launched US branch! For the past decade, Michael has brought an innovative and results-focused approach to the global shift toward a plant-based world. He is the co-founder and outgoing Strategic Director of Better Eating International, a US-based nonprofit which promotes plant-based eating through targeted digital media campaigns, modeled on best-practices from successful corporate, political, and public health initiatives. Before that he served for over seven years at Farm Animal Rights Movement (FARM), concluding as Executive Director, where he developed protocols to measure the results of FARM’s campaigns, modernized their branding, and co-produced the annual Animal Rights National Conference. Michael has spoken publicly in the US, Europe, and India on effective advocacy and has been interviewed for NPR, TIME, Al Jazeera, and other global media outlets.

He holds a degree from Evergreen State College in Environmental Economics and Policy, served for many years as Environmental Specialist Advisor to A Well-Fed World, and sits on the Animal Advocacy Research Grant Oversight Committee for Animal Charity Evaluators (ACE). He lives in Washington, DC, with his partner and their rescued cattle dog, and spends his free time veganizing common American foods and performing competitive karaoke.

We asked Michael a few questions about his big move to ProVeg International:

You’ve already held several prestigious roles in the veg advocacy movement. What made you choose ProVeg?

I have admired the work of ProVeg International since learning about its evidence-based approach to campaigning at the Animal Rights 2012 conference (when ProVeg was still called VEBU), and later, when I collaborated with Melanie and Sebastian to produce a vegan strategy summit in 2013. I have been continuously impressed by ProVeg’s creative and quantifiable campaigns to reduce meat consumption, and the organization’s willingness to adjust course when better evidence surfaces.

Before I even knew there was a formal movement for effective animal advocacy, I strived to improve the world for people and animals in measurable ways. My academic projects in Environmental Economics & Policy in the early 2000s calculated the carbon footprint of my university campus and identified interventions to reduce climate impacts. I shifted my life’s focus to farmed animal protection after realizing that if I could cause even a small reversal in the number of animals raised for food, I could save millions (or billions) of lives over my lifetime.

“ProVeg is the perfect intersection of everything I care the most about: a results-based approach to creating a healthy, compassionate, and sustainable food system.”

Is there anything that particularly excites you about the ProVeg team?

All the amazing people! I had not met many members of the team until a few weeks ago, and I was impressed beyond words. The staff of ProVeg is comprised of people who are compassionate, smart, and extremely generous. I love beginning a role where I have so much professional support, and where I know I am part of a large, winning team. I’m looking forward to my future trips to the Berlin headquarters, as well as to any opportunity to connect with the global team, and of course to growing the US staff.

Do you have plans for the US branch already?

To an extent, yes. I see ProVeg as an ultimately unifying force for the plant-based movement. ProVeg balances a bold, unabashed mission (reducing global animal consumption 50% by 2040) with a professional and pragmatic approach. This allows ProVeg to easily add value to others’ efforts, fill in gaps that no one else is yet covering, and surveying the global landscape in order to determine where the fastest gains can be most easily made.

Therefore, my first steps are simply assessing the needs of the US movement, and building a team that can help bolster existing efforts and action. Having said that, I’m excited to apply ProVeg’s impactful approach to numerous events in the coming months, including the Animal Rights 2019 Conference, the Reducetarian Summit, and the upcoming food industry trade shows, as well as organizing US training sessions for effective vegan advocacy.

Feel free to shoot me an email with any ideas for ProVeg US, and check out the opportunities to join our team!

ProVeg is growing. We need passionate, capable people to join us in the fight for a more humane, healthy, and sustainable planet. If you are interested in becoming part of the ProVeg family, check our open positions!