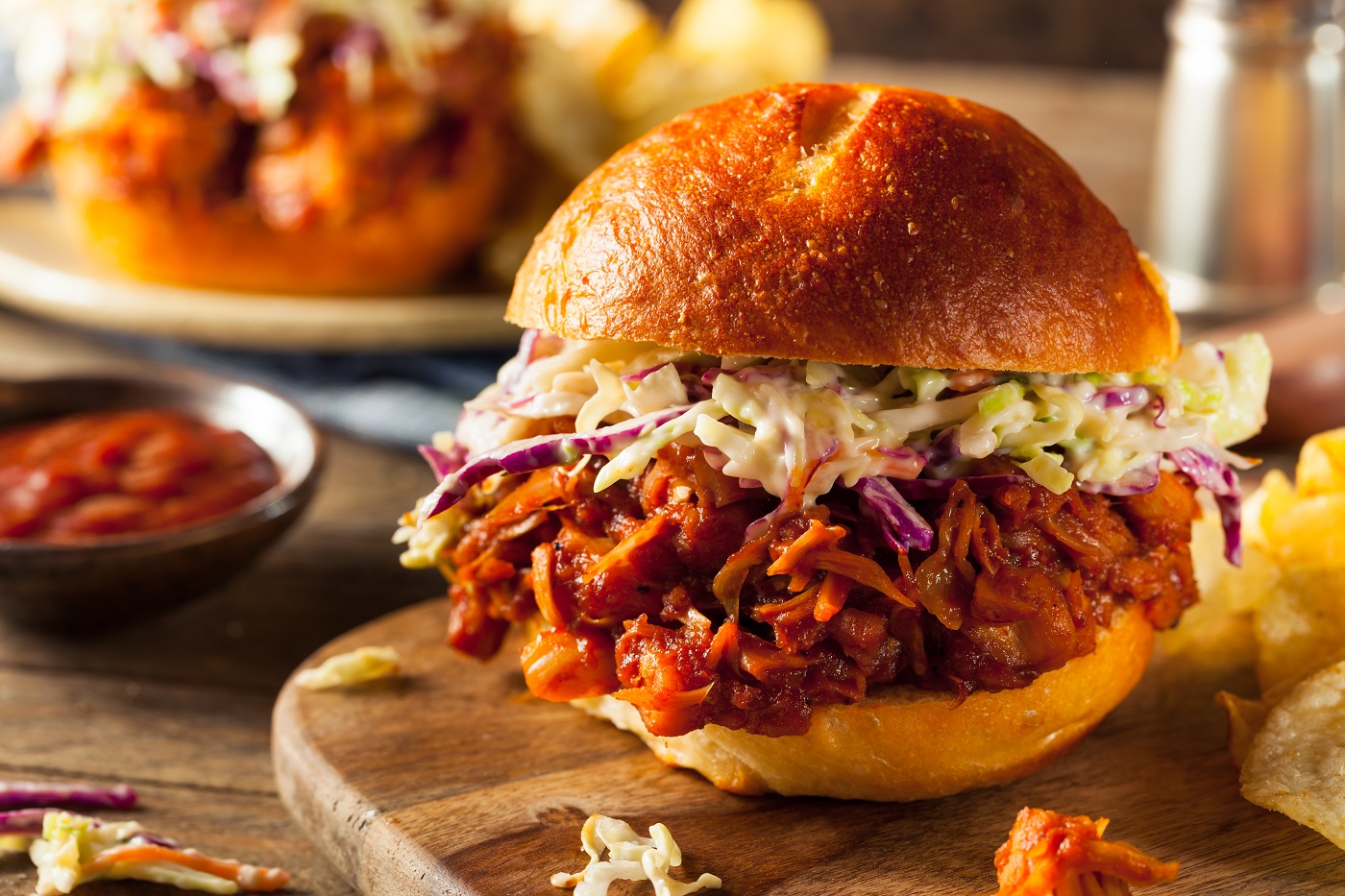 Nutritionists and climate experts alike are warning against the consequences of the current high levels of meat consumption in much of the world, while increasing numbers of consumers are viewing the consumption of meat in a negative light. Vegan products offer many health benefits and are significantly more sustainable than meat. ProVeg presents the 10 best meat alternatives.

Meat alternatives are growing in popularity

More and more consumers are questioning the consumption of meat and the effects that our diets have on animals, the environment, and our health. This is also reflected in the increasing demand for meat alternatives. All well-known supermarkets now offer a wide range of plant-based burgers, sausages, and other meat substitutes, based on legumes, vegetables, cereals, and other ingredients. Meat alternatives offer several advantages compared to meat. Vegan versions of burgers, for example, are free of cholesterol and usually contain fewer calories and less fat than similar burgers made with meat.

Tofu is the classic meat alternative and has been one of the basic sources of nutrition in Asia for centuries. It is appreciated in particular as a low-calorie source of protein. Tofu is also versatile as it easily absorbs aromas from spices and marinades. Today, tofu is available in countless variations, including aromatic, smoked versions, and marinated varieties flavoured with various herbs and spices.

Tofu is made using soaked soybeans, which are mashed with water to form a smooth puree. Afterwards, the puree is filtered, which separates the firm, fibrous constituents from the liquid content. The liquid is then heated to just below boiling point and curdled, which solidifies the liquid content in a similar way to how cheese is made. The tofu is then pressed into slabs, while the leftover solid mass, commonly known as okara or soy, is dehydrated and used as mince, chunks, or cutlets.

Soy chunks and mince are very inexpensive ingredients that are easy to prepare. They consist of dehydrated soy which, once mixed with water, can be used as a meat substitute in almost any dish. Soy is most commonly sold as mince, cutlets, or balls. As with tofu, marinades and spice mixtures can be added to produce virtually any aroma or flavor. This makes soy ideal for vegetarian burgers, meatballs, cutlets, bolognese sauce, or chilli sin carne.

Tempeh is a traditional Indonesian food, made from fermented soybeans. Similar to the production of cheese, tempeh takes advantage of the effects of special bacterial cultures that break down the protein in the beans and make them particularly accessible to the human digestive system. Containing 20% protein on average and a high fiber content, tempeh is ideal for a balanced diet. Thanks to its versatility, there are no limits to one’s culinary creativity when using tempeh.

Seitan is the protein contained in wheat. Easy to season and prepare, and with a consistency similar to meat, seitan is a popular meat substitute that has been a staple ingredient in Asian cuisine for millennia. It is made by washing wheat flour dough with water until all the starch granules have been removed, leaving only the wheat gluten. It acquires its meaty texture by boiling, baking, or steaming the raw dough. Seitan is used in a broad range of products, including cold cuts, sausages, and cutlets. Seitan powder is widely and cheaply available in many countries in the form of vital wheat gluten and is ideal for making vegan sausages or cold cuts at home. Vital wheat gluten can be made at home from wheat flour, although it is a time-consuming process. Since seitan is essentially wheat gluten, it is not suitable for people with celiac disease or those who are following a gluten-free diet.

Like soybeans, lupins are protein-rich legumes. Considered one of the meat alternatives of the future, the cultivation of lupins is particularly sustainable and easily possible in Europe, which has an ideal climate for it. Products containing lupin protein include cutlets, doner kebabs, and sausages. These are available from most organic food stores, vegan supermarkets, and online shops.

Spelt is a species of wheat and one of the oldest cultivated grains. Green spelt is the name for spelt grain that is harvested while semi-ripe. Once harvested, it is roasted and dried to improve its shelf life. This process lends the spelt a particularly intense flavour and makes it easily digestible. Green spelt has an especially high content of B vitamins, along with significant quantities of magnesium and phosphorus. Bruised grain and semolina made from green spelt are a good basis for vegetarian/vegan patties, cutlets, and meat(free)balls. Green spelt is available from organic health food stores and supermarkets in the form of partially prepared cutlets, bruised grain, or semolina.

Oat flakes can be used to prepare delicious cutlets. These consist of fried oat dough combined with vegetable broth, a little fat, grated carrots or zucchini, and usually other vegetable proteins. Oat flakes are an ideal source of zinc and iron and are available at an affordable price from any supermarket or discounter. Oat flakes provide a slow and steady supply of complex carbohydrates, which can prevent hunger and thus promote fat loss. Oats are an increasingly favored source of protein and are even available in the form of ‘pulled oats’, which are an alternative to pulled pork.

Burgers made from black beans are a popular, healthy, and delicious alternative to ready-made products and fast food restaurant fare. Black beans are rich in protein and fiber. The darker the bean, the more anthocyanins it contains. This natural vegetable colorant is a potent antioxidant.

Chickpeas should be an integral part of any diet due to their beneficial nutrient composition. They contain more protein than many types of meat, provide a substantial portion of iron, and have a calcium content similar to that of milk. Rich in fiber, chickpeas are very filling and constitute the basic ingredient in several Middle Eastern dishes, including falafel and hummus.

The humble pea is one of a number of other plant-based sources of protein that have been carving a niche for themselves lately as meat alternatives. Pea-based products currently available on the market are manufactured as a combination of vegetables, pea protein, and various spices. They contain a lot of protein and iron and are low in fat and carbohydrates. Although meat substitutes made from pea protein are increasingly available, for now, they are mostly found at vegan-friendly supermarkets.

The risks of meat consumption

Regularly occurring food scandals such as swine flu and rotten meat, as well as the increasing occurrence of multidrug-resistant pathogens, exacerbated by the high use of antibiotics, are just a few examples of the health risks that animal-based foods can pose. Meat consumption is also a risk factor for diseases of the cardiovascular system. A US study with more than 500,000 participants, showed that, compared to people consuming the least meat, men with the highest meat consumption were 27% more likely to die of cardiovascular disease, whereas for women the risk was elevated by 50%.[6]Sinha R, Cross AJ, Graubard BI, Leitzmann MF, Schatzkin A (2009): Meat intake and mortality: a prospective study of over half a million people. Arch Intern Med 169 (6), 562-71 The more red and processed meat that was eaten, the greater the risk became.

ProVeg does not only point out healthy, cruelty-free alternatives but also makes them more readily available. In 2011, ProVeg provided the idea for VeggieWorld – Europe’s first and biggest trade fair promoting a plant-based lifestyle – and continues to help the event organizers with the core program and the selection of exhibitors. Furthermore, ProVeg advises and supports innovative companies that want to enrich the veggie market with their products.