The future is plant-based

This World Vegan Day, we’re taking the opportunity to celebrate all things plant-based! Thanks to the growing popularity of veganism, there’s been a huge increase in the awareness and availability of plant-based foods, as well as an expanding recognition of the many positive effects of switching to a more plant-based diet. These ongoing developments are key to us reaching our mission to reduce the global consumption of animal products by 50% by the year 2040, and are a positive sign that we are well on our way!

2019 has seen a growing awareness of veganism and plant-based foods, as the once-marginalized diet has firmly established itself as a global trend. Thanks to passionate plant-based celebrities such as  Lewis Hamilton, who has invested in a plant-based burger chain and shares veg-friendly content with his 13 million social media followers, information about the benefits of a plant-based diet have spread far and wide.

More and more people have come to understand the health benefits of such a dietary change, while information on incorporating more plant-based foods into one’s diet has never been more readily available.

More innovation than ever

Countless new products from plant-based companies have hit supermarket shelves in order to satisfy the growing demand for climate- and animal-friendly foods. From plant-based tuna to creamy dairy-free cheese and milk, there’s been no shortage of delicious new options to try.

Plant-based meat innovation has also come a long way this year. Beyond Meat introduced an even meatier version of their famous Beyond Burger, with a texture nearly indistinguishable from its animal-derived counterpart, and will soon be bringing the Beyond Sausage to Europe. This and other products from plant-based meat brands such as Moving Mountains and Impossible Foods mean that it’s now easier than ever to make more planet-friendly food choices.

So many fast-food chains and major supermarkets have hopped on board, that it’s hard to keep up! Burger King added the Impossible Whopper to its menu, and Carl’s Jr. added vegan options including a beyond burger.  McDonald’s introduced a plant-based burger in Germany and parts of Canada. KFC tested the plant-based ‘Imposter’ chicken burger in the UK and Beyond Meat’s fried chicken here in the US. Qdoba announced that they were adding Impossible fajita bowls and burritos to all US locations. EU supermarket chains Tesco and Sainsbury’s even placed plant-based meat in the traditional meat aisle, nudging those who enjoy meat to try a more sustainable option instead.

While 2019 has seen a growth in plant-based options for consumers, there’s been increasing recognition from government bodies of the importance of a plant-based diet. The UN’s IPCC launched a report on land use and climate change in August that was widely shared and advocated for a plant-based diet as a viable solution to the climate crisis. Similarly, the EAT-Lancet report noted the considerable evidence that a plant-based diet is better for the health of humans and the planet. The report brings together the research of 30 leading scientists and advocates for the ‘planetary health diet’, recommending an increase in plant-based foods alongside a reduction in red-meat consumption.

In January, Canada released a revised national food guide for the first time in more than a decade. The new guide recommends opting for protein from plant-based sources and significantly reducing dairy and meat intake, lumping them into the protein category, alongside nuts and legumes. It’s promising for our planet and the health of us all to see plant-based diets backed by scientific research and government institutions.

The solution on our plates

This year has been a huge success for plant-based food, but there have been setbacks. In August, the ongoing burning of the Amazon rainforest made global headlines. It emerged that the majority of fires were started deliberately by ranchers to clear land for cattle production, as unfortunately, while plant-based foods continue to rise in popularity, there is still a growing global demand for meat. More recognition of the importance of reducing meat and dairy product consumption is vitally needed, in addition to systemic and individual change.

As an individual, you can help by making food choices that are better for humans, animals, and the planet! This World Vegan Day, why not sign up for our free online Veggie Challenge programme and try eating more plant-based food for 30 days? You’ll join a community of over 100,000 participants and receive tips, recipes, and support to help you along the way. 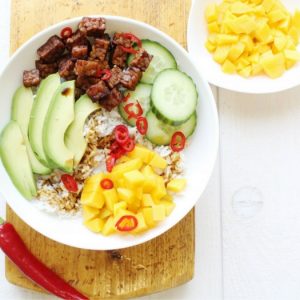 From milk and honey to meat and eggs, plant-based substitutes are now available for nearly all animal-based foods. Read our articles to learn more about all the amazing plant-based alternatives to your favourites!