Plant-based food got off to an amazing start in 2019.  From Marks & Spencer releasing Plant Kitchen to the relentless rise of the Greggs vegan sausage roll, plant-based food has wholeheartedly settled into the UK mainstream.

More people than ever are keen to try plant-based food, as Veganuary’s 2019 record-breaking figures showed.

Stepping on to the high street in 2017, The Free Vegan Cookout focuses on enticing shoppers and strollers to try tasty plant-based food at their outreach stalls.

The Cookout, as it’s affectionately known by its organisers and volunteers, is a non-profit dedicated to engaging consumers in upbeat and light-hearted conversations about transitioning to a plant-based diet.

The Cookout use food to bring people together

Focusing on “positive and friendly activism”, their UK wide teams take to the streets at weekends to offer free food to passers-by. Going by the maxim “When we share food with strangers, we break down barriers”, the Cookout stalls always have a buzz about them.

Drawn in by the free food, people are soon chatting

Discussions range from the latest supermarket options to what can be found in the local wholefoods shop, to recipe swaps and the health benefits of a plant-based diet. There’s usually a hot dish for the hungry masses –  a curry, soup or stew. The rest of the stall has an array of food brought along by volunteers.

The main focus is on homecooked foods – the aim being to show the public that plant-based cooking isn’t as complicated as some people might think. Caramelised onion quiche, raw vegan chocolate and raspberry cheesecake have all made appearances. The chocolate slice was such a hit at the Glasgow events that it’s now a regular feature. Supermarket options and purchased treats also add to the smorgasbord – from “accidentally vegan” party rings to Goodfellas vegan falafel pizza.

Since starting out in late 2017, The Free Vegan Cookout has given food to over 8,000 people

The Cookout has spread far and wide from its humble beginnings in Glasgow. Cookouts can now be found in several UK cities, including Perth, Newcastle, Durham and Leeds.

International locations have popped up to – Lisbon and Amsterdam are now on board. With plans to expand to 50 more locations, the Cookout shows no signs of slowing down.

So, get your recipe books out and visit one of their stalls near you soon or why not hold your own with their helpful advice! 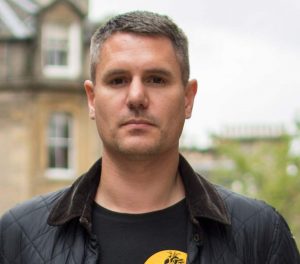 Steve is based in Scotland and employed in the public sector. In his spare time, he volunteers for animal rights groups and is working towards being a filmmaker.
@TofuSteve