Treatment of cows in the dairy industry 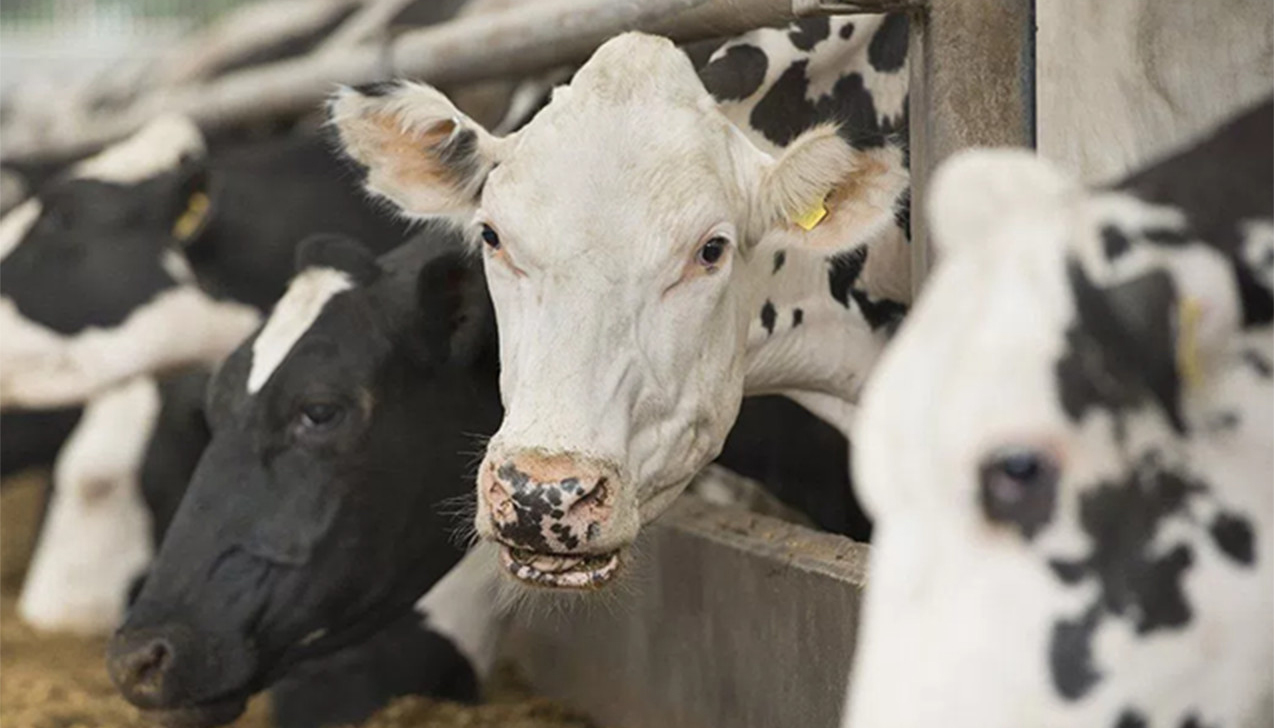 Dairy products are among the most frequently consumed animal products worldwide. Due to the enormous volume of milk production, dairy cows, who are intelligent, empathetic, and affectionate animals, must endure uncomfortable and stressful conditions which do not meet even their most basic needs. ProVeg takes a look at dairy farms and draws attention to delicious alternatives to milk.

Cows and their basic needs

Left to their own devices, cows live in herds of around 20 individuals together with their young, establishing a clear hierarchy with an alpha cow.[1]Sowell, B. F., J. C. Mosley & J. G. P. Bowman (2000). Social Behavior of Grazing Beef Cattle: Implications for Management. Journal of Animal Science 77, no. E-Suppl (2000): 1. They spend most of their time grazing, covering several kilometers per day. Their other main pastime is rumination, during which they lie down and rest.

Cows are intelligent and emotional individuals

Cows are extremely inquisitive and intelligent animals. They have long-term memories and can learn from one another. Cows have distinct personalities and forge close, lifelong friendships. The bond between a mother cow and her calves is particularly strong. Like humans, they mourn the loss of friends and family members. Cows are affectionate mothers and share the responsibility of watching over their playful calves with other females in the herd.

On today’s industrial dairy farms, cows are bred specifically to maximise milk production. As a result of this breeding, the average milk yield per cow has risen dramatically over the years. Calves naturally require about eight litres of milk per day for healthy growth. In contrast, modern breeds of dairy cows on industrial farms produce up to 50 litres per day, and as much as 12,000 litres of milk per year.[2]Food and Agriculture Organization of the United Nations (2017). FAOSTAT Statistics Database. Available at http://www.fao.org/faostat/en/#data/QL [02.01.2017] [3]Isermeyer, T., T. Hemme & J. Holzner (2003): Analysis of international competitiveness of milk production in the Framework of the IFCN. AGRIC. ECON. – CZECH, 49, 2003 (2): 94–100 As a result, while the number of cows on dairy farms in Europe has declined over the years, the volume of milk produced has increased.[4]Food and Agriculture Organization of the United Nations (2017): FAOSTAT Statistics Database. Available at http://www.fao.org/faostat/en/#data/QL [02.01.2017] Producing milk at such an unnaturally elevated rate is physically exhausting for cows, comparable in terms of metabolic effort to a human running 1.5 marathons every day.[5]Dairy Herd Management (2011): The bovine athlete. available at http://www.dairyherd.com/dairy-herd/the-bovine-athlete-113989584.html [25.07.2017] In order to produce a single litre of milk, a cow’s body must pump half a tonne of blood through her udder.

Living conditions and treatment of cows

Worldwide, more than 270 million dairy cows produce more than 650 million tonnes of milk annually.[6]Food and Agriculture Organization of the United Nations (2017): FAOSTAT Statistics Database. Available at http://www.fao.org/faostat/en/#data/QL [02.01.2017] Living conditions vary considerably, ranging from pasture grazing to intensive indoor confinement. In the EU, there is no specific legislation concerning the welfare of cattle.

Contrary to popular belief and what industry advertisers would like people to believe, even pasture-fed dairy cows do not spend all their time in pastures. They generally have access to pastures for less than five months per year. The rest of the year, they usually live in either tie stalls or cubicles. Cows seen grazing outside are typically beef cattle or young dairy cows before their first calving.

On many commercial dairy farms, cows live in cramped stalls, tied in place with a chain or rope. These conditions are so restrictive that, for much of their lives, cows in tie stalls are unable to walk, turn around, groom, look to the side, or interact with other herd members in a natural way.

In another common farming system, dairy cows live in 3.4 to 4.0 m² cubicles, with functional areas for resting, walking, feeding, and milking. In most cases, cubicle floors consist of concrete slats, making it slippery and stressful for cows to move around.

Like all mammals, cows produce milk only after giving birth. In order to maintain milk production levels, industrial dairy cows are forcibly inseminated each year. Like humans, cows gestate for nine months. During this time, cows are milked up until the seventh month of their pregnancies.

Newborn calves are separated from their mothers within a few hours of birth since the mothers’ milk is reserved for human consumption. The separation is traumatic for both the mother and her calf. She will be inseminated again six to eight weeks after giving birth.

Like their bull brothers, cows grow horns. Horns are used to communicate between herd members and resolve conflicts. For example, cows position their horns to signal that other herd members should come closer or move away. However, most modern farms dehorn calves to save space and reduce the risk of cows injuring each other due to the stress of their living conditions. Dehorning is a painful procedure in which the nerve endings and blood vessels from which the horns grow are burned off, usually without anaesthetic.

Calves as a ‘byproduct’ of the dairy industry

Most female calves born to dairy cows face the same fate as their mothers. They are isolated in small pens for the first eight weeks of their life, then spend the remainder of their lives producing milk for the dairy industry.

Male calves and ‘surplus’ females are most commonly sold to fattening farms, where they spend a few weeks gaining weight until they are slaughtered and sold as veal. In 2016 around 636,000 tonnes of veal were produced in the European Union, a significant proportion of which came from dairy cattle breeds.[7]Eurostat (2017): Slaughtering in slaughterhouses – annual data. Meat Product = Calves. Available at http://appsso.eurostat.ec.europa.eu/nui/submitViewTableAction.do

In total, more than 300 million cows are slaughtered for beef around the world each year.[8]Food and Agriculture Organization of the United Nations (2017): FAOSTAT Statistics Database. Available at http://www.fao.org/faostat/en/#data/QL [07.03.2018] Beef production in the Amazon rainforest is the biggest cause of deforestation, as well as a major contributor to climate change and decreased biodiversity.

Around 7.5 million dairy cows are slaughtered annually in the European Union.[9]Eurostat (2017): Slaughtering in slaughterhouses – annual data. Meat Product = Cows. Available at http://ec.europa.eu/eurostat/de/data/database [08.03.2018] Worldwide, commercial dairy cows are usually slaughtered as soon as their milk production starts to decline, generally between 4.5 and 6 years of age.[10]DeLaval (2013): Cow longevity conference. Conference Proceedings. Available at: http://www.milkproduction.com/Global/PDFs/Cow%20Longevity%20Conference%20Proceedings%20.pdf [19.03.2018] Cows who fail to conceive after their first insemination, as well as those who do not produce sufficient levels of milk after their first calving, are slaughtered at even younger ages.

Immediately before slaughter, cows are knocked unconscious with a stunbolt gun. However, a significant number of cows are improperly stunned and left to bleed to death while fully conscious. In Germany, for example, that number varies from 5% to 9% of individuals slaughtered.[11]Burger, K. (2015): Mit viel Liebe getötet. Süddeutsche Zeitung, 13.04.2015. Available at http://www.sueddeutsche.de/wissen/tierschlachtung-mit-viel-liebe-getoetet-1.2429399 [03.01.2017]

Between 10% and 20% of cows are pregnant when they are slaughtered.[12]Maurer, P., E. Lücker & K. Riehn (2016): Slaughter of Pregnant Cattle in German Abattoirs – Current Situation and Prevalence: A Cross-Sectional Study. BMC Veterinary Research 12, no. 1. … Continue reading [13]Di Nicolo K (2006): Studie zum zusätzlichen Eintrag von Hormonen in die menschliche Nahrungskette durch das Schlachten von trächtigen Rindern in der Europäischen Union am Beispiel von Luxemburg … Continue reading [14]Singleton, G. H. & H. Dobson (1995): A Survey of the Reasons for Culling Pregnant Cows. The Veterinary Record 136, no. 7 (February 18, 1995): 162–65. Because the stunning bolt affects only the mother cows, in many cases the unborn calves are conscious during the ordeal. Afterwards, they are killed by the workers.

Dairy products are among the most consumed animal product around the globe, with more than 110 kg per person consumed each year, most of it in European countries or North America.[15]Food and Agriculture Organization of the United Nations (2017). FAOSTAT Statistics Database. Available at http://www.fao.org/faostat/en/#data/FBS [08.03.2018]

Dairy products can be associated with health problems. Worldwide, about 75% of people are lactose intolerant, which means that they cannot digest the lactose in dairy products.[16]Suarez, F. L., D. A. Savaiano & M. D. Levitt (1995): A Comparison of Symptoms after the Consumption of Milk or Lactose-Hydrolyzed Milk by People with Self-Reported Severe Lactose Intolerance. New … Continue reading Symptoms of lactose intolerance may include bloating, diarrhoea, gas, nausea, and pain in the abdomen.[17]The National Institute of Diabetes and Digestive and Kidney Diseases(2017): Lactose Intolerance. Available at https://www.niddk.nih.gov/health-information/digestive-diseases/lactose-intolerance … Continue reading This can go undiagnosed for a long period of time and may impact negatively on health if it prevents the body from getting enough nutrients, such as calcium and vitamin D. The consumption of milk and dairy products can also promote heart disease due to their high content of cholesterol and saturated fats. Dairy products are also suspected of promoting some types of cancer, including prostate and breast cancer.[18]Qin L., J.Xu, P. Wang et al (2007): Milk consumption is a risk factor for prostate cancer in Western countries: evidence from cohort studies. Asia Pac J Clin Nutr. 2007;16:467–476. [19]Song Y., J.E. Chavarro, Y. Cao et al. (2013): Whole milk intake is associated with prostate cancer-specific mortality among U.S. male physicians. J Nutr. 2013; 143:189-196. [20]Chan J.M., M.J. Stampfer, J. Ma et al. (2001): Dairy products, calcium, and prostate cancer risk in the Physicians’ Health Study. Am J Clin Nutr. 2001; 74:549-554. [21]Kroenke C.H., M.L. Kwan, C. Sweeney et al. (2013): High-and low-fat dairy intake, recurrence, and mortality after breast cancer diagnosis. J Natl Cancer Inst. 2013; 105:616-623. In addition, dairy products can contain contaminants such as hormones and pesticides.

More and more consumers are questioning the consumption of cow’s milk and the effects that our diets have on animals, the environment, and our health. This is also reflected in the increasing demand for non-dairy milk. Plant milks have been consumed for centuries in various cultures, but their popularity has skyrocketed over the past decade. People choose plant milks over dairy milk for a variety of reasons. Whether it is for their nutritional value, animal welfare reasons, lower environmental impact, to avoid lactose or dairy milk allergens, or simply out of preference, there are many delicious options to try.

ProVeg does not only point out healthy, cruelty-free alternatives but also makes them more readily available. ProVeg supports and facilitates a range of vegan events throughout the year, from annual happenings such as VeggieWorld and VegMed to important one-off events such as CEVA trainings and legal and political symposiums. Furthermore, ProVeg advises and supports innovative companies that want to enrich the veggie market with their products. This ranges from mentoring early-stage start-ups to consulting for major international supermarket brands and administering the V-Label, which guarantees that a product is either vegan or vegetarian. Find out more about what we do to help the world transition to a more plant-based society and economy that are sustainable for humans, animals, and our planet.